All My Favorite Songs #3: The Ballad of El Goodo 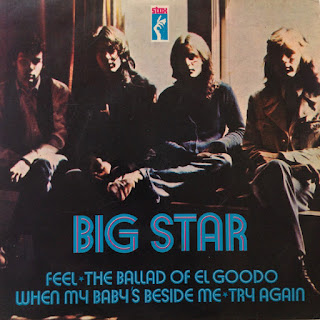 Ok, breaking from the Beatles... with the band who got slagged on their early 70s arrival for sounding too much like the Beatles.

I've written extensively about my enduring love for Big Star's 1972 debut, #1 Record, and while there's not a bum note on the LP, the clear stand-out for me is the gorgeous "Ballad of El Goodo." (And I'll admit that, to this date, I still have no idea what that title means.)

I'm not a religious guy, but for me this song is the ultimate spiritual song, a little bit of God for those who aren't necessarily down with God. Big Star's travails are well-documented--the way their shockingly amazing debut was completely ignored by the public due in part to record company issues (similarly reprised for their other two albums), discovered and championed only decades later by indie rock royalty; co-founder Chris Bell's struggles with religion, sexuality, and depression (and his untimely demise with a wonderful solo album still in the can); Alex Chilton's later rejection of the band's legacy as he pursued an at times self-defeating solo career.

Yet "El Goodo" brims over with hope, a recognition of sadness and the strength to fight back. "It gets so hard in times like now to hold on," sings Chilton, "But guns they wait to be stuck by, and at my side is God."

I've told my wife that, when I die, I want two songs played. This is one of them; the other comes tomorrow.

Chilton and the re-formed Big Star live:Meanwhile, I'm not alone in my passion for this song. It's been covered repeatedly in recent years; I even made a playlist compiling over an hour of various versions of the song I found on Spotify:

I've always been a bit partial towards the version by Evan Dando of the Lemonheads, recorded for the cult film Empire Records: