All My Favorite Songs #23: Queen Bitch 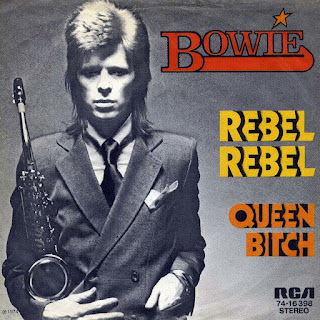 Picking a favorite Bowie track is pretty much a toss-up. (Indeed, I originally had a different tune from '71's Hunky Dory in this slot, but ended up swapping them.) And I wouldn't consider "Queen Bitch" to be his best or most significant song, not when you've got songs like "Heroes" and "Starman" to contend with. Nor can I call it a sentimental favorite; I was much more attached to the more obvious hits on the life-changing ChangesOneBowie compilation long before I picked up Hunky Dory.

But somehow, if I had to pick one Bowie song for a desert island mixtape, I'd land on "Queen Bitch." It's a simple, three-chord rocker, a crunchy little guitar riff with Bowie showing off his Who/Kinks roots; it's also the album's clearest predictor of the sound of the following year's Ziggy Stardust LP. And the catchy number is topped by a fun little tale of drag queen envy, supposedly a metaphorical tale of his early admiration of/rivalry with Lou Reed--cute but hardly deep. Yet for all its simplicity, the song is one that, when it comes up on a mix or shuffle play, I simply have to crank up and give my undivided attention. It's Bowie at his most fun, and it just never gets old for me. "She's so swishy in her satin and tat, in her frock coat and bippity-boppity hat. Oh God, I could do better than that."