All My Favorite Songs #28: It's All Too Much 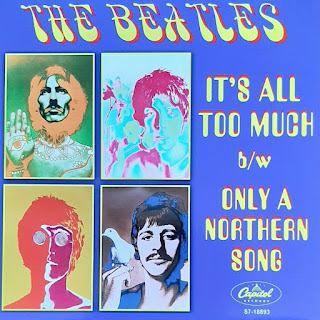 After a two-week reprieve, the Beatles are back to continue top-loading the list. I get the sense this one doesn't end up high on most people's lists of top Beatles songs, and frankly I don't get it; I've found it one of their most thrilling tracks since I first heard it as a kid.

It's probably the only George Harrison-fronted Beatles tune to make the cut, and also the band's most unabashedly psychedelic song, a Harrison acid trip set to deliriously layered music. Lyrically, it's George at his most lovelorn, a paean to his blue-eyed, blonde-haired beauty, but with plenty of trippy, flowery imagery that is plainly of the moment (yet durable). And the music? Wow. A sonic tour de force (praise to George Martin?). Gentle sheets of feedback and distortion--the Jesus and Mary Chain have nothing on the Beatles--and those ringing, bagpipe-like guitars; Ringo rocking those "Rain"-reminiscent fills; the tastefully deployed horn section; and most notably the punchy, reverbed pulse of percussion and handclaps.

The song was recorded during the Sgt. Pepper sessions but held back until it appeared on the 1969 Yellow Submarine soundtrack. Personally, I think it would've been a highlight of Sgt. Pepper (certainly far better than "Within You, Without You," the Harrison track used instead); and I go back and forth on whether this or "A Day In The Life" is the more fitting closer. Sure, "Life" is probably the Beatles' greatest number, but this puppy is no less the epic album capper. (I ended up using it as the finale for my home-constructed, reconfigured version of the record.)

Here's someone's recreation of the original, even longer version (they lopped off a verse for the official release):Steve Hillage (of prog-rockers Gong) did a blazing, more guitar-god version:And '90s shoegaze/Britpop act House of Love recorded an excellent, updated (but still pretty faithful) cover as well:
File Under: 1960s All My Favorite Songs Beatles Classic Rock Psychedelia