All My Favorite Songs #27: Wish You Were Here 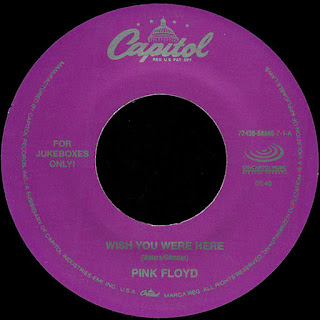 It took some time, but another one of my favorite bands from childhood finally makes an appearance on the list. I tend to listen to Pink Floyd more as an album band than for individual songs, most of which work best in their original context. Still, the title track from 1975's Wish You Were Here holds up well as a stand-alone piece, one of the rare tunes that, if it comes up on the radio, I'll have to drop everything and listen, however many thousands of times I've heard the damn thing. It's got a simple yet distinctive acoustic guitar riff--the sort of thing we'd strum along with endlessly back in summer camp--and Gilmour's vocals are unusually gruff and heartfelt without losing their typical prettiness.

And of course, so many lyrical lines that walk the line between cryptically brilliant and hopelessly opaque but, after decades of classic rock radio play and immersive home spins, are pretty much etched in our collective memory--"Did you exchange a walk-on part in the war for a leading role in a cage?"; "We're just two lost souls swimming in a fish bowl, year after year. Running over the same old ground, what have we found? The same old fears, wish you were here."

Live (post-Roger Waters):Also, was amused to come across this jukebox promo single of "Wish" back with... the Connells???? Awesome! 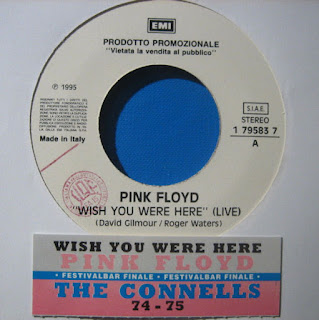