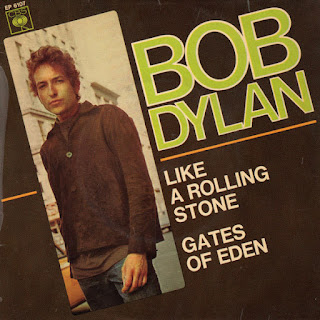 Yeah, it feels a little tired & clichéd to include this one. Growing up, "Like A Rolling Stone" was a perennial top pick every time Rolling Stone ran a Greatest Songs of All Time list, or the local classic rock station did a greatest song countdown over a three-day holiday weekend, so it almost seems mandatory to include it near the top of my list. And I'm not even a huge Dylan fan--yes, I adore 1965's Highway 61 Revisited (on which this originally appeared) and 1966's Blonde On Blonde, but beyond that I'm at most a casual listener, occasionally picking up one of his later 60s records or the non-Jesus 70s records or cranking up a live performance, but generally returning to those mid-60s career highs.

So it's hard for me to say if I truly love the song on its own merits, or I'm just conditioned to revere it like everyone else who grew up on classic rock radio. When I listen, part of the connection is historical and academic; I can't hear it without imagining the response a fan of folkie-Dylan might've had when Bob first plugged in and let this one rip, or an ordinary radio listener might've had when this came on the radio amidst the ordinary AM-dial dreck of 1965. I kind of assume that, between this and Rubber Soul and Pet Sounds, there must've been an instantaneous reaction that nothing would ever be the same.

But I do think I can set those credentials aside and say I love the song on its own merits. That opening snare crack; the organ and piano interplay; Dylan's savage snarl and so many lyrical phrases indelibly etched into the psyches of everyone who's ever heard the damn thing. We all know the song so well, have those words committed to memory, that it's hard not to take it for granted. But in a year where the biggest hits included "Wooly Bully" and "I Got You Babe," to open a song with "Once upon a time you dressed so fine, threw the bums a dime in your prime, didn't you?" Ballsy!

Bob goes electric, 1965:Countless cover versions out there; I'm partial to the Drive-By Truckers, giving everyone in the band a turn at the mic:Speaking of cover versions... I threw together a Spotify playlist with a nice variety: