All My Favorite Songs #21: (The Angels Wanna Wear My) Red Shoes 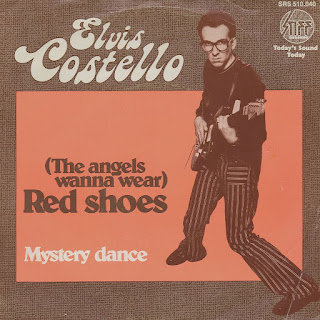 When I first started getting really into Elvis Costello back in high school--probably around 1980 or so--he already had a ton of songs. And not just songs, but absurdly great songs. Hell, his then-newish collection of b-sides, 1980's Taking Liberties, alone had 20 tracks, most of which were far better than anything being played on the radio back then. (That one stands up alongside the Who's Odds & Sods and a few others as leftovers collections that are better than most artists' proper albums, though it's since been rendered obsolete, its tunes appearing as bonus tracks on various reissues.)

Still, for all the great songs, "(The Angels Wanna Wear My) Red Shoes" (off his 1977 debut) pretty quickly stood out as a personal favorite. The jangly guitars and that wonderfully catchy, sing-along chorus make it one of his most powerfully direct pop songs. And even without the Attractions (who wouldn't start backing him until the second album), that opening salvo of restrained drumming lures you in.

But it's the lyrics that make it timeless. "I used to be disgusted, and now I try to be amused" is about as attention-grabbing as an opening line can get, an entire worldview summed up in just a few well-selected words. Even better is the ultimate break-up couplet: "I said, 'I'm so happy I could die.' She said, 'Drop dead,' then left with another guy." I mean, come on. Hearing this as a hormone-driven adolescent, this was just pure devastation. More broadly, the cryptically poetic imagery of busted-wings angels coveting Elvis' new wave shoes, juxtaposed with the more traditional longing for that girl on the dance-floor, is just mysterious enough to be eternally captivating.

...and a fantastic acoustic performance from 1999:
File Under: 1970s All My Favorite Songs Classic Rock Elvis Costello New Wave