All My Favorite Songs #11: Days 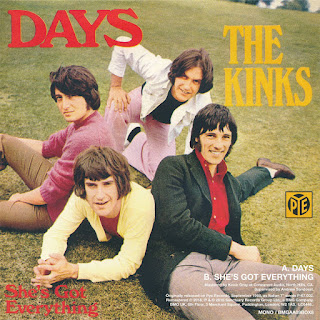 I realize it's somewhat obligatory to recognize "Waterloo Sunset" as the definitive Kinks song, Ray Davies at his songwriting peak... but I've always preferred the similarly sentimental "Days." Released as a single in 1968, the tune was also a bonus track on some reissues of Village Green Preservation Society, my favorite Kinks album, so that association may give it a bit of a subconscious boost for me (though it doesn't really fit in with the tone of the rest of the LP, presumably why its inclusion on early pressings of the LP was later dropped).

Can't really put my finger on what gives "Days" the edge; "Waterloo" is obviously great, and I have at least as much love for Village Green's title track. But it's about as sweet a love song as one can imagine without being maudlin, arguably a British take on the Beach Boys' "God Only Knows"--"Thank you for the days, those endless days, those sacred days you gave me." The melody underlying the verse is wonderfully insinuating, with the Davies brothers, the ultimate riff-rockers, forgoing power chords for some restrained finger-picking behind an eminently hummable tune. Dunno, but the song just works on every level.

Not surprisingly, a lot of artists have tried their hand at the song, but nobody comes close to the late great Kirsty MacColl at inducing tears:
File Under: 1960s All My Favorite Songs Classic Rock Kinks Kirsty MacColl