The Paranoid Style: For Executive Meeting (2022) 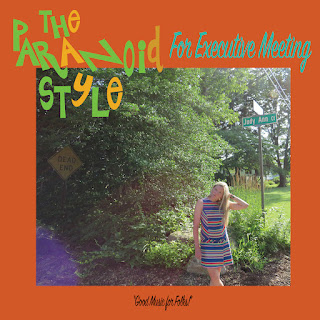 Yes, I've shifted from talking albums to talking songs--hey, we've made it through my Top 15 songs so far, only 885 left on the list!--but no reason I can't break in now and then with something new I've picked up or has otherwise captured my attention.

And the latest from The Paranoid Style--largely a studio project for gifted lyricist Elizabeth Nelson--is definitely worth a shout-out. In addition to having a regular ol' day job, and being a prolific writer/journalist (largely writing about music, but also golf, culture, and whatever else is on her mind), Nelson is an at times absurdly literate songwriter. As with their prior records--this is their third full-length LP (albeit one checking in at about 30 minutes), on top of a few EPs--one needs to sit down with the lyric sheet (thoughtfully included on the album's Bandcamp page) and Wikipedia to help decipher the nonstop barrage of often obscure references.

As usual, many of Nelson's topics linger in the musical world--songs include an ode to sadly overlooked Velvet Underground member Doug Yule, while "Steve Cropper Plays Femme Fatale" similarly invokes the Velvets; and the songs are riddled with lyrical asides name-checking not just Lou Reed but everyone from XTC to Culture Club to Fountains of Wayne. But it's not all music. You've got a song about English author P.G. Wodehouse, and, perhaps most poignantly, another about graphic designer Barney Bubbles (creator of a number of memorable album covers) who took his own life amidst personal setbacks and mental illness.

It might have felt at times more like a far-ranging, endlessly tangential TED talk, but the band. including Nelson's husband, guitarist Timothy Bracy, once again delivers a solid backing for Nelson's enthusiastically bemused delivery. While earlier work stayed in more of a post-punk indie rock lane, the music here varies quite a bit; yes, there's plenty of the super-tight Hold Steady-esque bar band rock of yore, but also that "Barney Bubbles" string section and "Doug Yule"'s honky-tonk Americana.

And as a bonus, the Drive-By Truckers' Patterson Hood--himself a lyricist of legendary proportions--pays a visit on the rocking "I'd Bet My Land And Titles."

Buy it on Bandcamp!

...and the excellently-titled "The Worst Of My Love":

For those new to the band, here's a mix to set you up: