All My Favorite Songs #5: So. Central Rain 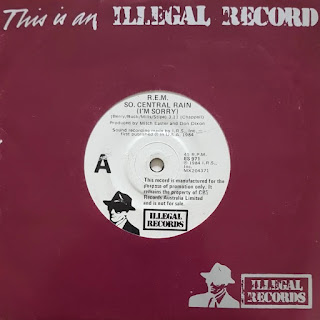 As noted previously in this space (and in an entire chapter in Jittery White Guy Music--you can read my R.E.M. excerpt here), discovering R.E.M.'s 1984 album Reckoning (and its 1983 predecessor Murmur) when I arrived at college in '84 truly changed my life. Yet I don't remember Reckoning's "So. Central Rain (I'm Sorry)" having a particular impact at the time. If anything, it was overshadowed by more immediate tracks like "Harborcoat" and "Pretty Persuasion" and "Second Guessing," upbeat tunes that grabbed me by the throat and, for coming up on 40 years now, have never let me go. And the country-tinged "(Don't Go Back To) Rockville" was another favorite, probably the one I played most on my college radio show.

But the gentler "So. Central Rain" steadily ingratiated itself over the years, to the point where it's become not just my favorite R.E.M. song, but one of the central songs in my life. Peter Buck's gentle jangle makes my spine tingle, and it's just a relentlessly pretty song, insisting you croon along to the chorus's plaintive "I'm sorry" cry.

And while Michael Stipe was still in his mumbling phase, many lyrics indecipherable (and to this date I still sing the incorrect lyrics I imagined at the time rather than the "right" lyrics later revealed by online lyrics pages), the opening line here was relatively clear and attention-grabbing. "Did you never call? I waited for your call as rivers of suggestion were driving me away." The rest of the song diverges off into the usual Stipe cryptic (and often indecipherable) imagery, but the opening is pure gut-wrenching break-up song (with a "Mr. Brightside"-like poetic spin on imagination-enriched jealousy).