All My Favorite Songs #8: Tumbling Dice 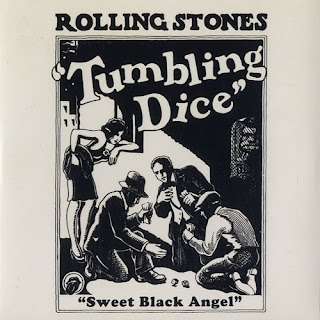 The Stones make their first appearance on the Top 900, checking in at #8 with this doozy off my favorite Stones LP, 1972's Exile on Main Street. And while, as with the Beatles, I could easily front-load my list with Stones songs, way too many to choose from, "Tumbling Dice" was a pretty easy call for my top Stones pick.

Part of my love for "Dice" is strictly emotional. I remember hearing the early Stones singles on the radio when I was first getting into music, songs like "Satisfaction" and "Get Off My Cloud." I borrowed a copy of the Hot Rocks 1964-71 compilation from the library, a pretty thorough run through their early hits, and of course loved it a lot, but it all felt, I dunno, like part of the distant past (like the early Beatles singles). But around the same time I heard "Tumbling Dice" on the radio, and it somehow hit me differently, felt fresher, more sophisticated than a lot of the older stuff (though of course it came a mere year after the Hot Rocks cut-off). Something indefinable grabbed me, and the song just seemed to make more of an impact on me than the rest of their work.

But my enduring love of the song equally derives from the fact that it's just an absolute banger, a perfect rock & roll single, the very best the Stones had to offer. The Keith Richards/Mick Taylor twin guitar attack is definitive here, Richards' riffing and Taylor's compelling slide guitar magically intertwined. Jagger is playful, soulful, abetted by the joyous harmonies. Some of the lyrics (which I've never quite discerned) jump off the page--I hear Jagger implore me that "You could be my partner in crime," and I can totally see hanging out with the guy. And more than anything, there's the way the drums kick back in after the quiet "You've got to roll me" bit, everyone sort of quieted down as if ready to fade out, but then that shambling snare starts back up in fits and starts at 3:00 into the song. (Apparently the drum bit was so tricky that even the late great Charlie Watts couldn't figure it out, so producer Jimmy Miller, himself an accomplished drummer, had to play the part; though Watts' compelling shuffle throughout the rest of the song ain't no slouch.)

Here it is live in 1972, the Stones at their Mick Taylor-era peak:
File Under: 1970s All My Favorite Songs Classic Rock Rolling Stones