All My Favorite Songs #26: Spider And I 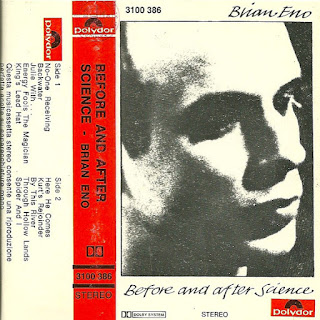 Most of the songs we've chatted about to date been pretty upbeat; hell, even the previous Brian Eno selection was on the thrashier side. Not so here. "Spider And I," the final track on the last of his 70s vocal albums, 1977's Before And After Science (after which he would spend years focusing entirely on instrumental ambient music, along with his varied production work) is hushed and hypnotic, largely just Eno's voice and a cascade of gentle synths. It's a stunningly beautiful piece, slowly building up before it drifts off, a bridge between his art-rock roots and his ambient future.

Lyrically, it conjures (at least for me) a post-apocalyptic vision, one brief poem doing some pretty heavy metaphorical lifting. 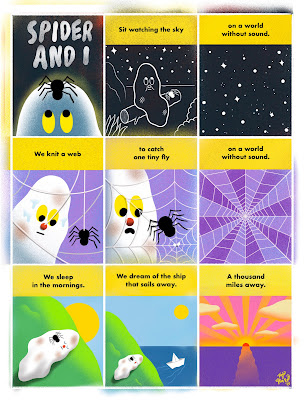 I first bought the Science album way back in high school, part of a two-fer cassette that paired it with his 1974 debut, Here Come The Warm Jets. So after some 90 minutes of incredibly varied music, from the debut's mix of glam & art rock to Science's schizophrenic combo of rock & ambience, it would be capped off with this haunting, quiet escape from reality. It's been one of my go-to songs for my insomnia mixes for decades; as a piss-poor sleeper, it's really the single track I most want to usher me off to sleep, or at least comfort me in my late-night waking hours.Goth-ish band The Hope Blister do a pretty faithful, if darker version:
File Under: 1970s All My Favorite Songs Ambient Brian Eno Electronica