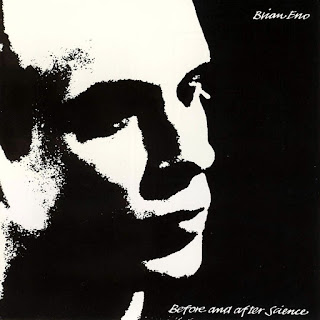 After leaving Roxy Music, "non-musician" Brian Eno released four startlingly innovative albums in rapid succession, before largely leaving vocal rock music behind him and embarking on a long career of creating instrumental "ambient" music (as well as a successful career producing artists including David Bowie, Devo, Talking Heads, U2, and so on).

Of those four initial albums, 1975's Another Green World is far and away my favorite. Of the countless albums I own, its probably the single most-played album in my collection (largely due to its tranquil nature making it an ideal solution to my chronic insomnia). But I opted instead to chat about his final vocal/rock album, Before And After Science.

This is not an album I listen to in its entirety, given its starkly disjointed construction (as suggested by the title). The first "side" (in vinyl lingo) hearkens back to his first two albums, with quirky, upbeat rockers and playful electronica, sounding like a cross between Bowie and then-nascent Talking Heads (indeed, the standout track "King's Lead Hat" is an anagram of that band's name).

But it's the second half that is so indispensable. Leading off with "Here He Comes," a lovely mid-tempo ballad that would have fit in perfectly on Roxy's Avalon, the album then slides into ambient territory, albeit retaining Eno's gentle vocals. "Julie With..." and "By This River" are both transcendentally lovely, stunning, meditative pieces that I find equally adept at easing my insomnia while urging me to stay awake to take in their beauty.

What really defines the album for me is the closing piece, "Spider And I." A gorgeous, soothing little sonic canvas with a slow build, a couple verses, and a slow fade, accompanied by evocative lyrics, it's the sort of thing I've always found emotionally transportive. It's open to interpretation, but I hear this song and picture a post-apocalyptic world, the last man on earth sitting on the water's edge watching the sunset.


Spider and I sit watching the sky/On a world without sound...
We sleep in the mornings
We dream of a ship that sails away/A thousand miles away.