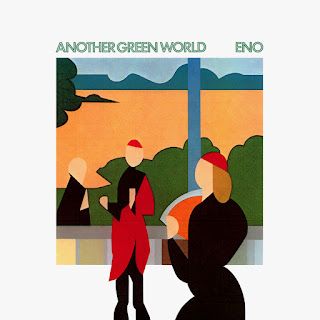 Repeat visitors to these parts have heard about my spiritual devotion to Brian Eno's 1975 masterpiece Another Green World, a huge part of my life which got its own chapter in my book. But while much of my love for the LP centers around the quiet ambient pieces, which have been ushering me into sleep (or the cosmos) for decades--aural paintings like "Becalmed" and "The Big Ship")--it was the upbeat rocker "St. Elmo's Fire" which first snagged my attention when I bought the record. (And, no, it's not the theme from the horrifically dire 80s movie.)

The song is both entrancing (like the album's quiet ambient pieces) and dissonant, a crash of oddly percolating percussion and pulsating keyboards, highlighted by a searing solo from King Crimson's Robert Fripp, a frequent Eno collaborator in the 70s who gives his all to the song. It's all held together by Eno's vocals, his decision to forgo vocal music for instrumentals following the 1977 follow-up Before And After Science rendered all the more bittersweet by the magic of his performance here. The lyrics are strangely evocative throughout, yet he makes the chorus refrain "in the blue August moon" unforgettably gripping.