All My Favorite Songs #12: Hey Jude 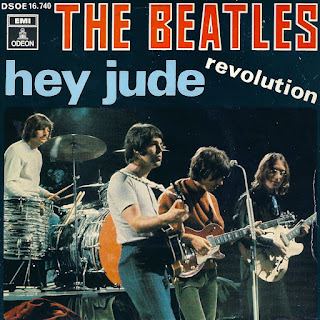 After some anticipated front-loading, this is the last we'll be hearing from the Beatles for a couple weeks. And I realize it's a divisive choice. Despite its commercial success and appearance on a lot of all-time-best lists, 1968 single "Hey Jude" also seems to bug a lot of diehard Beatles fans. Ok, fine, it's an early example of McCartney sometimes going for the lazy line in lieu of actual profundity ("The movement you need is on your shoulder"? Really?); and, sure, maybe the nah-nah-nah-nah coda goes on a few minutes too many.

Still, I've never quite shed my lifelong love for the song. It was an early favorite for me; one of the songs that instigated my undying love for the Beatles when I was first exploring the FM dial as a kid. It offers one of Paul's finest and mostly timeless melodies, which dug its hooks in when I was young and never really let go. And those harmonies! And say what you will about Paul's occasional banality, but tell me that opening line--"Hey Jude, don't make it bad. Take a sad song and make it better"--isn't deeply embedded in the subconscious of everyone who's ever heard it. And I like the endless nah-nah-nah-nah coda. So there!