All My Favorite Songs #6: Death Or Glory 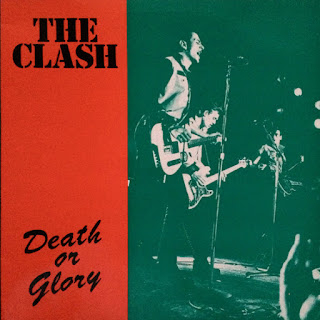 The Clash's 1979 masterpiece London Calling has been my favorite LP of all time pretty much since that first spin as a wide-eyed adolescent. Nearly every song is a winningly infectious, shout-along anthem, yet with biting lyrical content that often stands in contrast to the feel-good nature of the music.

And "Death Or Glory" is the perfect encapsulation of that duality. When I was younger, I enjoyed it purely as a rousing rave-up, the chorus's title proclamation an undeniable call to arms (or at least a call to roll down the windows and crank up the volume). It probably took a little longer for the rest of that sentence to really sink in. "'Death or Glory' becomes just another story."

Musically, it's a stunning merger of the band's punk roots with a more radio-ready power-pop sheen, Mick Jones' treble-crazy guitars boosted by a simple yet indelible hook, and the intro is a fantastic showcase for Topper Headon's always-riveting attack-and-restraint drumming dynamic. But, of course, it's the lyrics here that stand out.

The Clash had been preoccupied with selling out and facing disenchantment right from the start. (Give 'Em Enough Rope's "All The Young Punks" lamented, "the future shining like a piece of gold, but I swear as we get closer, it looks more like a lump of coal," barely a year into the punk revolution.) "Death or Glory" takes it up a notch, middle-aged suburbia lurking just around the corner--"Every cheap hood strikes a bargain with the world, ends up making payments on a sofa or a girl." Of course, they drive home the point with one of the most unforgettable couplets of the past half-century:

I believe in this and it's been tested by research
He who f*cks nuns will later join the church.