All My Favorite Songs #10: The Kids Are Alright 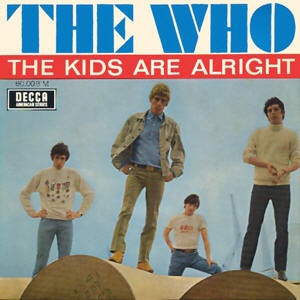 As is the case with other bands who make a number of appearances on my Top 900, it's damn near impossible to pick a favorite Who song. There are others that I might argue are objectively "better" songs (and we'll get to them soon enough), but 1965 single "The Kids Are Alright" has always had special poignance for me.

When I was a kid just starting to obsess about music and gradually moving beyond the AM radio top 40, digging deeper into rock history, The Who quickly became my favorite band. It was hearing Who's Next that first hooked me--I've got a chapter on my relationship with the record in my book--and sent me scurrying through their back catalog. The local library had a double-vinyl reissue of their debut LP, My Generation, paired with the later odds & ends collection Magic Bus, and I remember having mixed feelings about the former. Sure, "My Generation" was a great song, and there were others I liked on the debut, but there were also some bluesy tunes that I didn't care for, Daltrey's James Brown impersonation not really up my alley. But then there was "Kids," and it really jumped out for me.

I think it's fair to say it was the first power pop song I heard. Maybe that's not what they called it, but in the chiming guitars, the harmonies, and that deliriously infectious sing-along chorus ("Gonna leave her behind when the kids are alright...") you can hear the roots of the genre later mapped out by Big Star and Matthew Sweet and every other artist that relishes the joy of a simple, catchy guitar pop tune. "My Generation" had a visceral thrill to it, but "The Kids Are Alright" was the one that made me think, I need to find more songs that sound like this.

Pete & Roger, still bangin' away and turning it into an autobiographical narrative:
File Under: 1960s All My Favorite Songs Classic Rock Who