All My Favorite Songs #16: Powderfinger 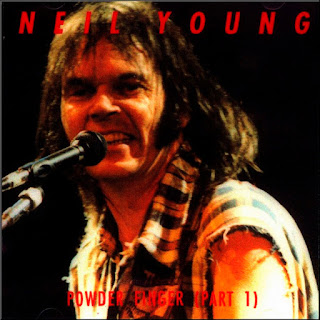 Neil makes his first appearance on the list, and like some of my other favorite artists, while it's hard to whittle his vast body of work down to just a few tracks to avoid clogging up the Top 900, coming up with the top pick was relatively easy. "Powderfinger" is simply epic, a poignant tale of a Hatfields & McCoys-type clash, a young man making a tragic last stand to defend the family home from the marauding ship coming up the river.

The lyrics do a remarkable job telling a compelling story with just a few striking details. "Daddy's gone and my brother's out hunting in the mountains. Big John's been drinking since the river took Emmy Lou. So the powers that be left me here to do the thinkin'. And I just turned twenty-two, I was wondering what to do."

The brief stand-off, alas, doesn't go well for our young narrator. "Raised my rifle to my eye, never stopped to wonder why. Then I saw black and my face splashed in the sky."

The tale is backed by one of Young's most memorable pieces of music, the brief guitar riff closing out each verse leaving a strong impression.

Its first appearance on record remains the definitive version, a 1978 live performance with Crazy Horse scrubbed of audience noise for 1979's Rust Never Sleeps. But Young has subsequently released earlier recordings of this song, a work in progress tested out in both acoustic and electric form and eventually seeing daylight decades later. So you've got the acoustic 1976 recording (found on 2017's Hitchhiker), a stripped down yet emotional folk tune; and the original electric version dropped from 1975's Zuma, finally appearing on 2020's Archives Vol. 2 box set, a bit too slow and dirge-like (and, like the acoustic version, lacking the guitar riff that he later added). Not to mention countless live versions (1991's Weld album being particularly fantastic).

There are plenty of covers out there as well. Here's Feelies side project Yung Wu with their relatively faithful recording:1980s college radio cowpunks The Beat Farmers gave it an upbeat jangle-pop Americana spin:And of course the Cowboy Junkies stripped it down to its roots and found the beauty within.