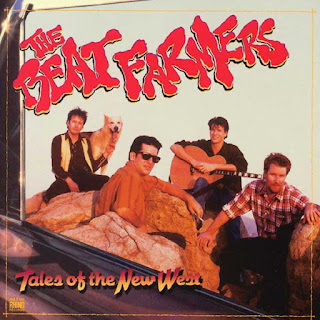 The Beat Farmers were one of the original "cowpunk" bands of the mid-80s college radio era, infusing their jangly, Byrdsy guitar rock with a healthy dose of old-school twangy Americana, putting them in line with peers like the Long Ryders and Jason & The Scorchers. They released a half dozen or so solid albums between '85 and '95 (disbanding when their drummer passed away), but I've always had a soft spot for the debut, which blends straightforward country-rock with some sillier faux-country numbers, a pervasive playfulness (reminiscent of the Young Fresh Fellows) throughout.

A few highlights include opening track "Bigger Stones," which is lighter on the twang and hews closer to the early R.E.M. vibe; a rollicking countrified take on the Velvet Underground's "There She Goes Again" (incidentally also covered by R.E.M.); and the light-hearted honky-tonk "Lost Weekend." The CD reissue appended the follow-up EP, Glad 'n' Greasy (highlighted by a nice take on Neil Young's "Powderfinger"), as well as various demos and live tracks; dunno if it's still available, but definitely worth tracking down.

Here's a live performance of "There She Goes Again":


...and "Lost Weekend":
...and "Goldmine":
Here's an audio rip of "Bigger Stones":
Here's some spotty live footage of "Never Goin' Back":
Here's "Powderfinger" from the follow-up EP: