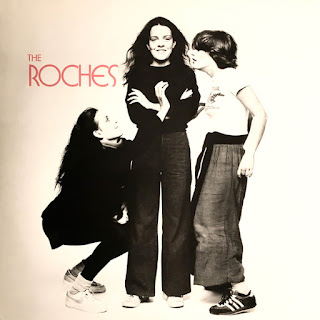 To call this folk rock is a stretch; it's pretty much straight folk music, almost entirely a lone acoustic guitar and the joyously unpolished voices of sisters Maggie, Terre, and Suzzy Roche. But, wow, those voices. Eschewing the niceties of easy-listening pop, the sisters bring a decidedly distinctive timbre, more conversational than lulling, like the acoustic side of Jonathan Richman. And when they lock in on a harmony, it's pure heaven -- not in a clean, pretty take on Beach Boys-styled a capella, but in the manner of three sisters down the block who just want you to listen to their stories.

Which isn't to say this isn't perfectly lovely -- cuz, damn, those harmonies! -- but it's something you need to sit up and pay attention to, not just flick on in the background as ambient sweetness.

Of course, one of the more interesting historical notes on the record is their choice in producer -- prog wonk and experimental guitarist extraordinaire Robert Fripp. Yet Fripp mostly leaves them alone to do their thing, giving the unadorned acoustic guitar plenty of breathing room (with the occasional addition of helpful basslines from Fripp's (future) King Crimson bandmate Tony Levin). The only time Fripp makes his presence known is on album stand-out "Hammond Song," where his subtle Frippertronic tape loops provide some backing. If anything, I do wish Fripp showed up a bit more (as he would when he returned to produce their excellent third album), as his sonics elevate that song from a gorgeous harmonic folk tune to a truly stunning masterpiece. Oh, well.

Anyway, I love this little gem. I may listen to some of their later work, which fleshed out the sound and moved in a more pop-oriented direction, a bit more (their final album, 2007's Moonswept, is terrific, and 1985's Another World has some fabulous songs, albeit rendered somewhat unlistenable by god-forsaken 80s new wave production); but the songs here are a fantastic introduction to these unique vocalists and storytellers.

Here's an audio rip of "Hammond Song":
Here's an early performance of "Mr. Sellack":
Here's a live take on "The Train":
...and "Quitting Time":

In case you missed it, here's my playlist of songs from Robert Fripp's late 70s run as collaborator, adding his distinctive guitars to others' songs, including the Roches.