All My Favorite Songs #24: Roadrunner 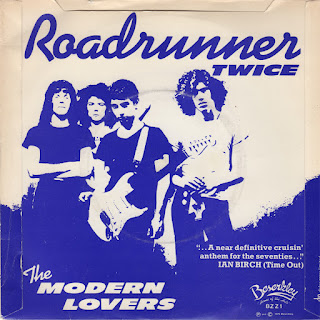 Rock & roll stripped down to its most basic and primal, Jonathan Richman and his original Modern Lovers ask the question, "Who needs three chords if you can get it done with two?"

Recorded essentially as a demo in 1972 (with the Velvet Underground's John Cale producing), but not released until 1976 (on the Modern Lovers' legendary self-titled debut), the song is one of rock's great what-if stories. It has all the makings of the perfect proto-punk alternative hit that would've placed the Lovers as much in the pantheon of legends as the Velvets, Stooges, and New York Dolls: that simple two chord riff (a variation on the Velvets' "Sister Ray," sped up and turned into a pop song); Richman's nasal, eternally boyish vocals relishing the joys of driving around Boston with the AM radio on; the garage-band organ solo courtesy of a pre-Talking Heads Jerry Harrison. But, alas, by the time the album came out, Richman had long since moved on from the Modern Lovers and their edgy, Velvets-influenced sound, instead embarking on a decades-long career that saw him taking his wide-eyed, relentlessly square yet endearing world-view and giving it a much more acoustic-based, whimsical sound.

Still, "Roadrunner" endures as a one-non-hit wonder, an essential coming-of-age moment for college radio and indie fans (I still remember my buddy Chris, freshman year of college, shocked that I'd never heard it and cranking it up on his turntable). It's hard to imagine a song better suited to cruising around the old neighborhood (well, place it alongside Big Star's "In The Street"), its anthemic RADIO ON! shout-along coda imitated by many.