All My Favorite Songs #2: A Day In The Life 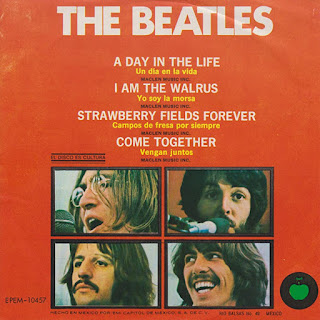 As noted yesterday, a bit of Beatles front-loading on my list of favorite songs is unavoidable. And while "Rain" may be my favorite Beatles song (in terms of sheer re-playability), 1967's "A Day In The Life" is their absolute finest moment. I mean, this is kinda beyond dispute, isn't it?

It's hard to imagine a better way to close out Sgt. Pepper. (Well, actually, I can think of an alternative closer... we'll get to that soon enough.) Just a breathtaking epic. While most Beatles songs are showcases for John or Paul, here you get the best of both worlds. The main song is John's, and certainly one of his greatest compositions (ok, the greatest), both musically and lyrically."I read the news today, oh boy" is probably one of the most instantly identifiable lines in  all of rock music, and the "I'd love to turn you on" refrain somehow manages to avoid sounding dated and trite the way Lennon delivers it.

But in the middle they tuck in a stray half-completed McCartney song, and while it's light relatively to John's trippier, contemplative suite ("Woke up, got out of bed, dragged a comb across my head" is Paul at his most Paul), it somehow helps rather than hinders the song. Heavy and whimsical all at once.

But the real magic is in the overall sound of the song. The production is devastating. John's vocals have never sounded better, ethereal and dreamy; Ringo's drums are a master class in restraint--barely there, yet doing a ton of heavy lifting in the empty spaces. And of course the nearly minute-long piano note outro, slowly fading to the point where you can hear the Abbey Road air conditioner in the background. It's such a complete, unique piece of work that it really can't be replicated. (Though The Fall, of all bands, were surprisingly game to give it a shot.)

File Under: 1960s All My Favorite Songs Beatles Classic Rock