All My Favorite Songs #22: God Only Knows 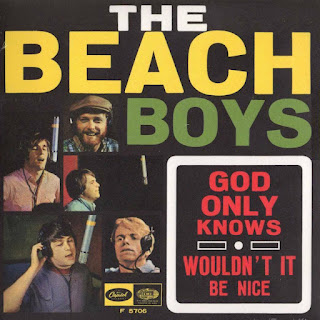 Here's another one that feels a bit like an obligatory inclusion, something that shows up high on the list because it has to.

Frankly, I was a late Pet Sounds convert (late as in my 20s, some years after most of my musical revelations). I was kinda put off of the early surf hits I'd grown up on in my childhood, all those Endless Summer tracks, and not terribly interested in what I understood to be an almost easy-listening, not rock & roll at all Beach Boys album. But when a remastered stereo version of the CD came out while I was in law school, I decided to belatedly give it a shot, and was blown away. By that point I was able to listen to it as a master class in vocal arrangements and restrained studio professionalism. Sure, the lyrics were still pretty teen-oriented, not far removed from their earlier girls-and-cars motifs, though much more vulnerable and soul-baring; but the whole "Brian Wilson is a genius" thing finally made sense to me.

"God Only Knows," which Brian gifted to brother Carl, is of course the album's real set-piece (though I like about half the album just as much). It's become a bit overexposed these days, showing up a little too frequently in pop culture (i.e. the Big Love title credits, among others), but divorced from the over-saturation it's just a magical number. Maudlin sentiment, maybe, but unusually thoughtful for an AM radio pop song, the "God only knows what I'd be without you" refrain still standing high above standard love song fare; and those vocals (and Hal Blaine's drums in the coda) seal the deal.