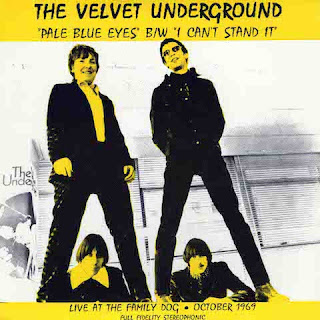 My favorite Velvet Underground song is probably their least Velvet Underground-y song. The band is best known for their groundbreaking noisier, confrontational work, or maybe their more pop-oriented rock songs. And sure, right from the start Lou Reed offset his deliberately abrasive side with surprisingly pretty ballads, but even there, the softer tunes had a bit of an edge (i.e. "Femme Fatale").

"Pale Blue Eyes," however, is a straight ballad. It's achingly and unironically beautiful (a trait it shares with a few other tracks on their 1969 self-titled third record, my personal fave), full of longing and unrequited love, Lou at his most heartfelt. Reed gets his best croon going, and while his sing-speak vocal style isn't exactly Sinatra (or McCartney), the song hits you right in the gut. "Thought of you as my mountaintop, thought of you as my peak. Thought of you as everything I've had but couldn't keep. Linger on, your pale blue eyes."

Here's a live version from their 90s reunion tour, with some nice viola from original member John Cale (who wasn't there for the third album, giving a sense for how this might have sounded had he stuck around longer):Plenty of covers out there, but I've always loved how R.E.M. played it:
File Under: 1960s All My Favorite Songs Classic Rock Lou Reed R.E.M. Velvet Underground