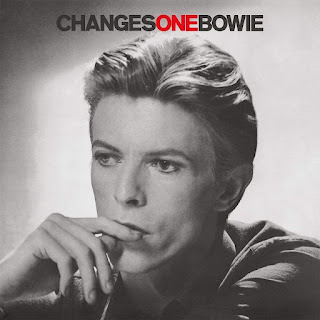 I'm not much for greatest hits albums. I've always been wedded to rock albums as an art form, preferring to experience songs in their original long-player context. Which isn't to say I don't also like to cherry-pick an artist's finest moments, particularly when listening in short bursts, like in the car or at the gym; but I prefer to make my own mixes, picking out my personal faves (which, in the case of more radio-friendly artists whose big hits suffer from radio overplay, typically look dramatically different from the official greatest hits package). I did this back in the tape days, and still make single-artist CDRs rather obsessively; I've also been recreating these as Spotify playlists, many of which you can find on my webpage.

Still, particularly when I was a kid first discovering classic rock (and on a limited budget that precluded buying up all of the band's records), greatest hits collection were a big part of my life. I'd bike over to that record store in the mall and pick up a "best of" cassette, preferably one of those bargain-priced (The Nice Price!) compilations, of whatever band I'd just heard on the radio. That's how I first got into bands like the Byrds and the Hollies.

By the time I got to college, discovering new bands through a greatest hits package had almost entirely dropped off; and I can't remember the last time I bought a pre-fabricated hits collection. Nonetheless, there are a few specific collections which, while I don't spin 'em these days, made a particular impact on my young self.

Discovering Bowie through the Changes record was a rite of passage when I was young. Bowie wasn't necessarily the sort of artist that had a lot of traction in the pre-teen set, but you'd hear a stray song on the radio and get a little curious. By the time I discovered him in the mid/late 70s, he already had an insanely varied body of work, something that became immediately apparent when you brought the tape home from the mall and inserted it into your tape deck, quickly realizing that none of the other songs sounded remotely like the one single you'd heard on the radio. As I wrote in my book:

I was fascinated; the record sounded like one of those K-Tel collections—A dozen dynamite songs! A dozen original artists!—only every one of those artists was David Bowie. It seemed impossible that the same guy was responsible for the Floyd-like “Space Oddity” and the jaunty music-hall “Changes” and the fist-pumping “Suffragette City” and the disco-infused “Fame.” My love of Bowie only deepened as I came to realize that most of my favorite songs—“Heroes,” “Sound and Vision,” “Queen Bitch,” “Life on Mars”—weren’t even included on that hits collection. 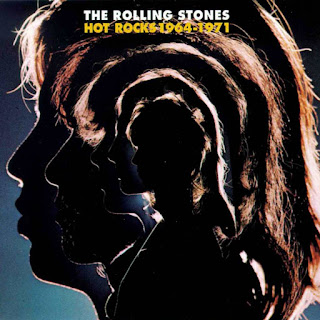 Another game-changer for me. When I first started listening to pop radio at the age of nine, the big Stones single was "Fool To Cry," and I hated that song with a hot, fiery passion (probably still do, but I've steadfastly refused to play it ever since, even though I've come around on parts of the weak, transitional-phase Black And Blue LP). But eventually I became aware that the Stones had been around for some time and had some songs that were not "Fool To Cry." I borrowed the Hot Rocks double-LP from the public library, and as you can imagine, quickly discovered that, hey, this band is pretty good. As hits collections go, it's particularly indispensable; I almost never listen to any of their early records, making it an easy go-to for key early tracks. "Get Off My Cloud" was probably the song that made me into a huge Stones fan, one of the all-time powerhouse singles. (I later grabbed the follow-up, More Hot Rocks, which in some ways was much cooler, including music that was wholly unfamiliar to me from the radio, particularly their psychedelic-era tracks like "We Love You" and "Child Of The Moon" and the Satanic Majesties singles.) 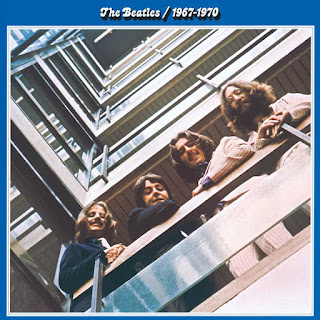 Those two Beatles collections, the so-called Red Album (1962-1966) and Blue Album (1967-1970), were the standard way for kids in the '70s to first discover the Beatles. I was particularly drawn to the latter collection; sure, the early singles were groundbreaking and wonderful, but I didn't play them much (and even today I'll rarely spin up anything before 1965's Rubber Soul). In contrast, I was utterly awed by their later work. Their Sgt. Pepper/Magical Mystery Tour psychedelic period in particular quickly became my favorite music in the world; when you're 10 or 11 years old circa 1976, introduced to rock music by cheesy AM radio singles by Abba and the Bay City Rollers and Kiss, it's hard do describe the impact of hearing something like "Strawberry Fields Forever" and "A Day In The Life" and "I Am The Walrus" for the first time.

This was probably one of the records which also later turned me off of greatest-hits collections. I still remember hearing Sgt. Pepper and the White Album and especially Abbey Road for the first time, shocked at how much timeless music didn't make the cut for the Blue Album, and how much better those songs that did sounded in their original context. (Though for 60s bands like the Beatles and Stones, who had a lot of truly essential singles that were not included on albums, the hits package remained indispensable, at least until the CD reissue era when you could reconstruct expanded versions of the album adding in contemporaneous singles.) 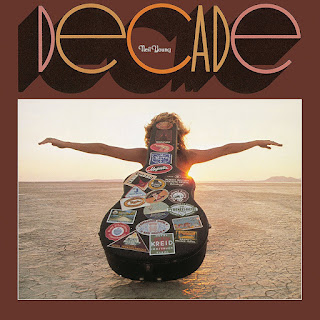 Young is an artist who, like Bowie, truly transcended genre in the 70s, making it impossible to appreciate the breadth of his work (and genius), at least on a limited budget, without picking up the hits collection. And the sprawling 3-LP Decade was particularly inclusive, snagging a side's worth of Neil's Buffalo Springfield contributions, a couple CSNY singles, and a few unreleased tracks, alongside the obvious album cuts. At the time I first checked this out of the public library (a standard way for me to discover music when I was too young to drive to the store and had no income besides a small allowance), I was maybe familiar with "Heart of Gold" and one or two other songs, but I knew little about Neil beyond what I had read. The Buffalo Springfield songs in particular were a revelation (I knew nothing of the band aside from hearing the Stephen Stills-helmed "For What It's Worth" on the radio); but tracks like the jaunty "Walk On" and the sweeping "Down By The River" and "Cortez The Killer" totally wowed me and made me a life-long Neil acolyte (even if I didn't care for some of the more country-oriented tunes at the time). 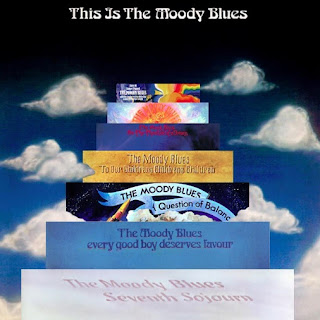 When I was in high school, the local record shop started a brief program where you could pay a buck or two to "rent" albums (while signing an agreement that you would of course never dream of violating copyright law by taping the album). They eventually shut that down for obvious reasons, but as a kid obsessed with discovering everything he could get his hands on who could much more readily afford a box of blank tapes than a few dozen albums... well, you can imagine. Anyway, I knew the Moody Blues from a few old hits like "I'm Just A Singer" and "Nights In White Satin," and borrowed this album to get a broader view. And really loved it. Yes, I have mixed feelings about some of their sappier tunes and lightweight "prog," but pretty much every song on this 2-LP collection was a delight. I eventually picked up all their albums, and while, as is often the case, many of the songs sound better in their original context, my limited patience for some of their work makes them particularly apt for discovery through a hits collection. 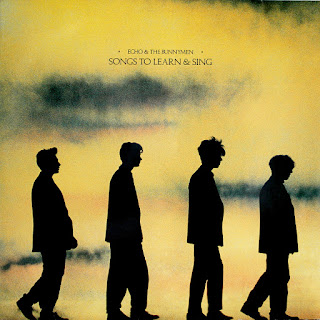 As my high school journeys through classic rock continued, I became increasingly focused on hearing albums rather than singles; and certainly by the time I got to college, when I had access to the radio station's massive library as well as some spending money from summer jobs, my flirtation with hits packages largely ended. Still, now and then I'd opt for a shortcut into a band.

Echo & The Bunnymen were one of the 80s bands I liked, but didn't necessarily love (I've come to enjoy them much more over time). But culled down to just the singles, they were insanely great. This was the perfect package, cherry-picking their very best tunes (when I made my own personal collection after later acquiring all the original albums, it didn't look dramatically different) while throwing in their latest single at the time ("Bring On The Dancing Horses"). It's one of the last such collections I bought, and one of the few today I'd still take over any of their albums. 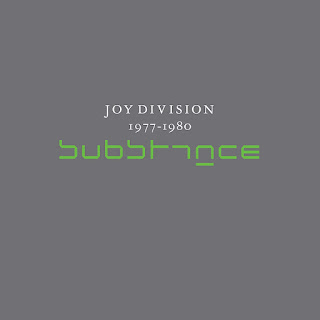 Bringing it full circle, Joy Division were in some ways a return to the world of 60s-era Beatles & Stones, releasing a number of crucial singles that they didn't include on their albums. Indeed, the short-lived band, tragically cut short by singer Ian Curtis' suicide, only had two proper albums; yet their non-album releases were far more voluminous. 1981's posthumous Still collected a number of them. But this collection, almost entirely non-duplicative of Still, picked up the finest non-album work, from their earliest EP (still in their noisy punk mode) to their transcendent final singles "Atmosphere" and "Love Will Tear Us Apart." It helpfully includes a number of tracks that were available only in limited release, so while I was a huge Joy Division fan, I was hearing much of this for the first time when I bought it. The CD is oddly sequenced, running through the A-sides and then circling back for the B-sides; the later Singles collection re-sequenced the same material to keep the A/B sides together and run through them chronologically.

This came out around the same time as the collection from the post-Curtis New Order bearing the same title, which similarly compiled non-album A- & B-sides; that's a fine collection, with some killer non-album tracks (and some lesser b-sides), but the Joy Division one is the real keeper, the rare hits collection that's as essential as any of the band's long-players.