Grateful Dead: These Go To Eleven! 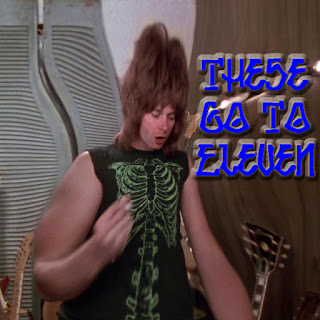 Picking up on a half-joking Twitter post, I decided to make a silly little mix weaving together various versions of "The Eleven" from a number of live performances circa '68-'70. An early psychedelic jam showcase during the Dead's most primal period, "The Eleven" debuted in January 1968 as a coda to "China Cat Sunflower." It takes its name from the song's unusual 11-beat meter--i.e.:

Following those early appearances, "The Eleven" was frequently played as the closing part of a "Dark Star/St. Stephen" medley, the placement heard on the band's classic Live Dead album from 1969. (And of course, by 1969, "China Cat Sunflower" became permanently joined to "I Know You Rider" instead.)

As the band moved into the Americana sound found on 1970's Workingman's Dead and American Beauty, they dropped the song from the repertoire, the sole exception being a lone performance at a free show played during their 1975 touring sabbatical. (That performance is captured on the massive 30 Trips Around The Sun box set from a few years back.) While that ended the Garcia-led band's tenure with the song, various post-Garcia iterations of the band (Further, Dead & Co., Phil & Friends, Ratdog, etc.), as well as Dead tribute bands like Joe Russo's Almost Dead and Dark Star Orchestra, have all incorporated it into their setlists.

While the Grateful Dead proper performed the song about 100 times, I whittled my mix down to a mere 8 performances, all unavailable on official vault releases, just enough to fill a single 80-minute CDR. (Yeah, I'm old school, I still like to burn my mixes to CD.) I segued these together so they run relatively seamlessly as a single 80-minute suite, some slight variations in style and sonics over the 3-year period but mostly just that relentless, driving, 11-count beat.

I've uploaded the mix to Sendspace; it'll auto-delete in a few weeks, so grab it now if you're interested. (It's a single folder of mp3's you'll need to download and unzip.)

Here's the song (though the video doesn't match the performance; they did not in fact play "The Eleven" at the gig where this video was shot, but it gives you some flavor of the era):

Here's how it sounded last week, slowed down to a snail's pace by the creaky old dudes in Dead & Co. but still wielding that freaky rhythm:And, of course, the mix's title comes from this:
File Under: 1960s Grateful Dead Jam Band Live Music Mixtapes Psychedelia