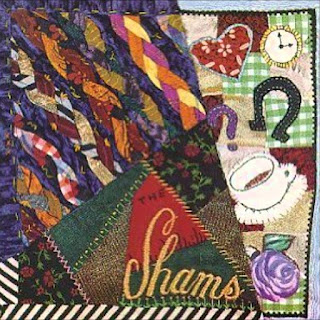 The Shams, a female trio that only stuck around for a single album (and a short EP), are most notable for the presence of a young Amy Rigby, who would reappear as a solo artist five years later. (If you don't already have her wonderful solo albums, run, don't walk, and grab them now, starting with her amazing debut Diary of a Mod Housewife.) Rigby wrote most of the songs on the record and plays guitar, and hints of her biting, deeply intimate, observational humor that would permeate her solo career are already showing up on some of the tracks.

Notwithstanding Rigby's distinctive songwriting, the main attraction here is the sound of those delightful, interwoven three-part harmonies. With songs that range from folk to alt.country to pop, the Roches are the most obvious comparison, as are the McGarrigle Sisters, though some of the more jangly pop touches suggest the Bangles as well. They also get some musical assists from dB's drummer (and Rigby's now-ex-husband) Will Rigby as well as legendary guitarist Robert Quine (of Richard Hell, Lou Reed, and Matthew Sweet fame).

Sadly, while I try to write about albums that you can run out and buy, or at least listen to online, this one's the exception; it's long-out-of-print (I paid some outrageous price on Discogs for my copy) and doesn't stream anywhere. And I could only find one pre-existing audio track from the record on YouTube (there could be more, don't quote me), for "Brown's Diner"--which thoughtfully reprints the lyrics, an early insight into Rigby's unique genius.

Given the relative dearth of material, I have tried for the first time creating a YouTube video myself; I try to avoid this out of copyright concerns, but given that this album hasn't been for sale in decades, I hope the artists won't mind. Here's opening track "It'll All Catch Up To You." (Who knows, if people check this out maybe I'll upload more tracks from out-of-print albums.)
Amazingly, someone captured video of an entire Shams concert from 1990 and shared it; it's a work of true beauty, so set aside an hour and go crazy:

Ok, found another one, here's a track from the follow-up EP, a much quieter number:

Hey, what the hell, I went and made a second video, this one for the 2nd track on the LP, "Stuck Here On The Ground":
File Under: 1990s Amy Rigby Folk Shams Singer-Songwriter Women Who Rock