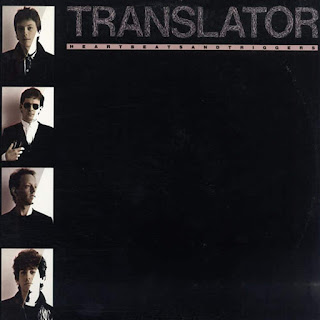 San Francisco-based Translator were an earlier purveyor of the jangly guitar rock that would entrench the 1980s college radio scene, with shades of R.E.M. and Dumptruck. But they also had one foot more firmly in harder-edged post-punk, calling to mind Television and Dream Syndicate, as well as the offbeat new wave-infused power pop of the dB's and Plimsouls. Their debut album is highlighted by the killer single "Everywhere That I'm Not," a wonderfully catchy new wave-ish shoulda-been-massive track with a dark, aggressive vibe tied to a sing-along chorus. "When I Am With You" is similarly infectious, jagged and frenetic but, again, with jangly pop hooks. The balance of the album has a weird dichotomy, split between melodic, often downbeat jangle pop tracks like "Everything You See" and the gorgeous "Everywhere," and the high-energy post-punk edge of tunes like "Sleeping Snakes" and the almost Talking Heads (circa Fear of Music)-like "Favorite Drug."

It's an album that deserves more credit as central to that early/mid-80s college radio sound, definitely worth checking out even if only one half or the other appeals to you.

They had 3 more albums in the 80s, all solid, increasingly moving towards the more melodic, jangly side of their sound (particularly the excellent self-titled 1985 release). There's also a terrific "best of" compilation called Everywhere That We Were from 1996 which does a nice job of cherry-picking the best tunes.

The band has reformed a few times since then, releasing a few new records over the years, though I'm not as familiar with those.

Here's the MTV-ready video for "Everywhere That I'm Not":