The Return(?) Of Live Music + My Morning Jacket 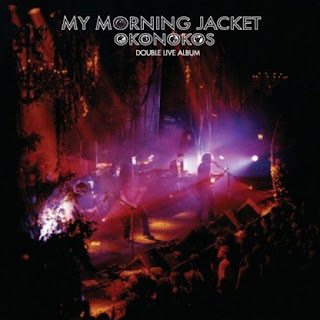 With artist livelihoods depending almost entirely on touring in the digital music era, the pandemic shutdown was particularly hard on musicians. Which is to say nothing of us mere fans for whom live music is a big part of our existence (something I can personally say less and less, as my aging bones and increasing crankiness have diminished the number of shows I see each year).

I've finally started getting out to shows again, as the half-dozen concerts for which I'd bought tickets a year or two ago are being rescheduled. I caught Phish at Shoreline a couple weeks back, my first concert in over 18 months (I think my last show before the shutdown was George Clinton in Berkeley in February 2020). And it was fantastic, not just a particularly great concert by one of my favorite touring bands, but just the joy of being in the presence of so many people (the band included) clearly delighted at being back in the game. After months of seeing the amphitheater (in Mountain View, CA, just south of Palo Alto) off in the distance as I took bike rides on the trails abutting the San Francisco Bay, it felt great to be there once again for live music, whether hanging with similarly joyful fans in the lot before the show or dancing foolishly in the stands. (Sadly, the show was originally scheduled for Tahoe--my semi-annual excursions there to see Phish play being one of my favorite activities in the world--but had to be moved due to the raging fires threatening the mountainside vacation community, which put a bit of a pall over the event.)

Of course, that "presence of so many people" bit was still kinda scary. Despite being an outdoor show at a venue that required proof of vaccination, in a part of the country with high vaccination rates, it was hard not to be nervous, and even as I got deep into the band's 45-minute wigged-out jam on "Soul Planet" (apparently the 3rd-longest song Phish has played in their 30 year existence), the thought of all those bodies in close proximity would periodically invade my safe space and bring me back down to earth. My Pfizer held up and everything was fine, but that sheen of background worry was lurking throughout the show and in the days afterwards.

(By the way, for anybody reading this who has not been vaccinated, and/or takes issue with vaccine mandates, may I gently ask you to fuck off?)

This weekend I made it to another show, My Morning Jacket at Berkeley's Greek Theater. MMJ are another one of my favorite live acts--with my concert-going down to maybe a half-dozen shows per year in the past decade, pretty much the only bands I see are my favorites, with an exception (like George Clinton) here and there--and they did not disappoint. In fact, though I've seen them a number of times over the years, they were at least as good as (if not better than) they've ever been, seemingly invigorated to be back out on the road after a Covid-imposed sabbatical.

I can't recommend seeing them live highly enough; their style is all over the place, from soul to Americana to jam-band experimentation to hard rock, elements of Wilco and Skynyrd and Pink Floyd and Radiohead interwoven into an orgiastic musical soup. And their performances bring out the majesty of songs that is sometimes only hinted at in their studio recordings. Indeed, I was a little underwhelmed by their most recent album, last year's Waterfall II, but totally fell in love with the handful of songs from the record they played at the Greek; I cranked up the record the next morning and now think it's amazing, so go check it out--as my friend pointed out, it's definitely a record that demands a little extra volume to appreciate its sonic richness.

This time I felt a little more comfortable; the vaccination checks seemed a little more rigorous (though it's not like they're gonna block some anti-vax idiot with a phony vaccination card), there was a little more space, and getting through the Phish show unscathed helped, though obviously the lingering concern about a breakthrough case never went away. (And I'm not out of the woods yet, so who knows.)

Anyway, I've talked about the band's live album (2006's Okonokos) before, and it's fantastic, so go check it out if you haven't experienced them live yet. Or for a better indicator of how they sound today, there's a soundboard recording of a performance from the current tour over on the Live Music Archive, do not miss it! (There's also an audience recording of the Berkeley show posted there, and it's just as great.)

Here they are opening the Berkeley show with "One Big Holiday," look for me in the crowd...

Here's a video for "Spinning My Wheels," a highlight of the Waterfall II album: