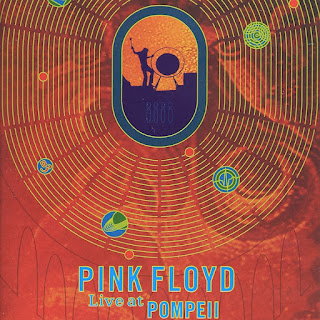 I still remember, way back in high school, when my friend Craig pulled out his older brother's bootleg VHS tape of the film capturing Pink Floyd's performance at an empty, ancient amphitheater in Pompeii, Italy. I was still an obsessive Floyd fan at the time (ok, still am), falling under their thrall when The Wall came out not long after my 13th birthday. By high school, the band were essentially no more, dissolving after the dark but sonically majestic The Final Cut, a Roger Waters solo album in all but name. So getting to see this legendary movie--at the time it was pretty hard to come by in video rental shops, at least in our suburban enclave--was pretty cool.

It's a little unusual for a concert film--there's no audience, and the performances are often interrupted by gimmicky cinematography and footage of ancient artifacts and running lava and the like. Plus, they break up some of the live segments with brief studio snippets of the band recording The Dark Side Of The Moon, which, sure, were cool enough, but given the clean break between the band's earlier music represented in the concert and the world-changing Dark Side, feel out of place.

But the performance itself is pretty awesome. Not a lot of songs, but essential for any Floyd obsessive (or even casual fan). Half comes from 1971's amazing Meddle: the thumping bass and ominous roar of "One Of These Days"; the pithy, inconsequential blues of "Seamus" (here renamed "Mademoiselle Nobs"), featuring a solo by David Gilmour's howling dog; and of course the epic "Echoes," 20 minutes of jamming ecstasy. The film oddly splits "Echoes" into two tracks to bookend the concert, much as they'd do with "Shine On You Crazy Diamond" on 1975's Wish You Were Here, which makes some sense from the standpoint of a concert film but breaks up the flow a bit. It's balanced out with a few outer-space excursions from their earlier days (most notably a bone-chilling "Careful With That Axe, Eugene").

Needless to say, I was pretty captivated at the time, though most of the friends who had joined me and Craig for a viewing in his parents' basement wandered off long before it was over.

The film became more widely available when it was later released on DVD (one of the first purchases I made in the DVD era), though the audio itself remained available solely on bootlegs recorded from the film. The band finally released an official audio version on a massive box set a few years ago. Needless to say, it still sounds amazing.

Here's "One Of These Days":