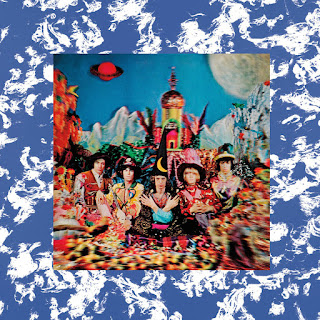 Taking a break from my break with a quick hit... a little something I pulled out this week.

In the late 60s, it was obligatory for every British band to try their hand at a psychedelic album, blending the trippy and the quaint, making their ow stab at replicating Sgt. Pepper and Piper at the Gates of Dawn. (I think only the Who and the Kinks avoided the indulgence.) Some bands with their roots in British Invasion R&B made the transition with surprisingly great results -- the Small Faces' Ogdens' Nut Gone Flake; the Pretty Things' SF Sorrow; the Zombies' Odessey & Oracle; not to mention the Moody Blues, Hollies, Bee Gees, Status Quo and so on.

The band whose brief transition was most open to question was the Stones. At the time I discovered 1967's Their Satanic Majesties Request back in the 70s, the record enjoyed a pretty negative reputation, generally seen as something of a failure. Over the years that reputation has improved somewhat, and it seems most people are more willing to embrace it. As for me, while I initially liked it far less than those other records I mentioned, I've really come around. Sure, psychedelia wasn't a great fit for the band (i.e. the harpsichord and tremolo vocals of "In Another Land" sounding like a Spinal Tap imitation of the genre), the record a bit of a sore thumb between their early singles and the run of remarkable rock & roll LPs that followed. But it's undeniably fun, and if you set aside the obviously dated sentiments, there are some wonderful songs--not just the obvious classics "2000 Light Years From Home" and "She's A Rainbow," but catchy tunes like "Citadel" and "2000 Man" which, while maybe not essential parts of the Stones canon, are at minimum fun little era throwbacks.

That said, I've found the album can be greatly improved with just a few modifications. I mixed my own version, purging the lengthy and grating reprise of "Why Don't We Sing This All Together" (well, for my own mix I edited it down a bit, but on the playlist below I just cut it) while adding in the band's three psych-oriented singles--"Dandelion," "We Love You," and "Child of the Moon" (the latter released a bit later as the "Jumping Jack Flash" b-side but still fitting in well here). Check it out for yourself below.