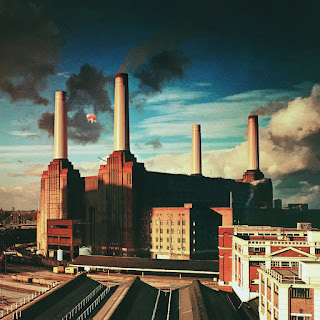 Back during my middle school/high school classic rock obsession, the Who and Pink Floyd were my personal passions. And while I still love both bands (totally into the recent Who Sell Out reissue right now), I don't pull out the Floyd nearly as often as I used to. When I do, I largely stick with the early stuff, from the Syd Barrett era up through 1971's Meddle. The string of classic rock/concept album touchstones beginning with Dark Side of the Moon through their Final Cut swan-song get played a bit more sparingly. Still, I have great love for Animals, which sometimes gets overlooked in the classic rock canon.

It's probably their most "prog"-like record (though I've never found Floyd to be all that proggy, as they're far more focused on lyrics than show-offy, complex musicianship) -- you've got the unifying thematic concept (an exploration of the archetypes set forth in Orwell's Animal Farm); it's primarily just three epic suites (bookended by a short, repeated acoustic piece); and the whole package is a bit too intimidating for radio airplay. But it's also a guitar-lover's joy, David Gilmour in peak form throughout. And sonically it's majestic, without the overkill of the sometimes cumbersome Wall, like the way the vocals dissipate into synths in the "Sheep" verses, and that song's phenomenal guitar riff coda (which Gilmour liked so much he repeated it on "Cry From The Street" on his 1978 solo album); the crunchy guitar/keyboard interplay that kicks off "Pigs"; the multi-part, sprawling, yet endlessly hypnotic "Dogs"; and so on.

Anyway, I pulled it out yesterday for the first time in quite a while, and still enjoyed it immensely.

Here's what I had to say about my history with the album in Jittery White Guy Music (still a bargain on Amazon!):