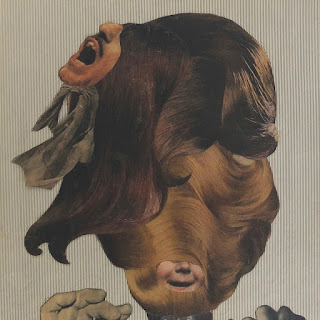 One of my favorite new albums this year, the Peacers' third album sounds like a mash-up of the Beatles' White Album and Pavement's Wowee Zowee as performed by Guided by Voices' Robert Pollard. It's ragged and strange, alternatingly electric and acoustic, but ultimately tethered to infectious (if subtle) pop hooks.

The band's Mike Donovan started out with post-punk act Sic Alps, a band I found a little too challenging and stand-offish, but the Peacers add more of a pop sensibility to the mix (without losing the experimental aspects that may put off the faint of heart). The creepy cover, not to mention song titles like "Ghost of a Motherfucker" and "Dickdog in Paris," suggest more of Sic Alps' abrasiveness, but get past appearances and it's a ridiculously tuneful record, and substantially more polished than the Peacers' lo-fi prior releases.

Opener "Ms. Ela Stanyon's School of Acting" sets the tone well, fuzzed-out vocals and guitars (shades of the Beatles' Revolver here), but still at heart a rambling off-kilter pop tune. "Colors For You" is even catchier. The afore-referenced "Ghost" is something off an alternate universe John Lennon album, while "Dickdog" is a crazed tempo-shifting Pavement romp. The pithy "Blackberry Est" similarly conjures Pavement but injected with the Velvet Underground's "Lady Godiva's Operation." "The Thunder Is An Electrical Love" verges on psychedelic glam. "Alloyed Sheik" pulls in more late-period Beatlesque pop, scuzzed up a bit, while the comparable closer "Make It Right" is almost pretty.

It's a strange little record, a lot of music I'm still trying to parse through, but something I can't seem to put down. Check it out on Bandcamp.