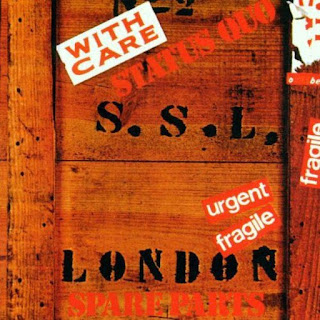 While Status Quo is best known for their long career of hard rock & 12-bar-boogie music, I'm partial to their early psychedelic work.  (Their career path seemed to follow a similar trajectory as that depicted in This Is Spinal Tap, though the film's stars have denied basing Tap on any particular band.)  Among other things, the original Quo recorded what is hands-down one of the best psychedelic-pop singles of all time, the insanely catchy "Pictures of Matchstick Men."  Their 1968 namesake debut album (Picturesque Matchstickable Messages) is a ton of fun, with a number of tunes that waver between psychedelia and bubblegum pop.  Less appreciated, though, is the more varied follow-up.

Spare Parts is worth it just for "Mr. Mind Detector," a trippy single second only to "Matchstick" for a pure late 60s UK psychedelic groove; it's got a great pop hook, but plenty of studio chicanery to make it a blast on headphones.  That this track isn't a staple of FM classic rock is thoroughly bewildering.  Nearly as great is "Face Without A Soul," another nifty psychedelic single that calls back a bit to the first album but is far more musically adventurous.  Elsewhere you've got their version of the King/Goffin classic "You're Just What I Was Looking For Today," a song that apparently every psychedelic band in existence between '68-'69 was contractually required to record, but their take holds up as well as any.

A few of the tracks are on the sappy side, reminiscent of the band's prior covers of early Bee Gees tracks, but at minimum they're melodic and enjoyable (i.e. the poppy ballad "So Ends Another Life"), and some of these are pretty solid baroque psyche-pop (i.e. "Velvet Curtains").  One of their best songs is a contemporaneous outtake added to later CD editions of the album, "Do You Live In Fire," which gives hints of the riff-rocking music they'd later be known for while retaining the early psychedelic pop sound; it's pretty killer, one of the great lost tracks of the 60s.

Here's a video of "Mr. Mind Detector" (reunion live footage synced to the original song):
And here's an audio rip of "Face Without A Soul":

And here's an audio rip of "Do You Live In Fire":