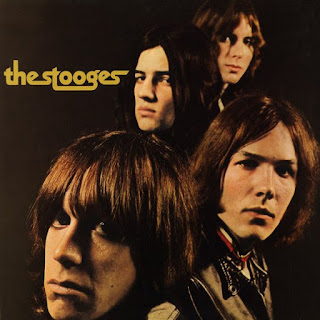 I came to the Stooges in a roundabout fashion.  In high school, like a lot of the weird music nerds, I would occasionally listen to Dr. Demento, the famed DJ who played novelty records and other humor bits (perhaps best remembered as the guy who brought Weird Al to the public).  One song I first heard on the show (and on a Dr. Demento record I bought) was "I Wanna Be Your Dog" by the Seven Stooges -- a novelty tune that merged the Stooges' original with imitations of The Three Stooges.

At some point, it occurred to me that I should check out the real Stooges, and finally got around to listening to the first album.  Though I was already a huge fan of the Velvet Underground by then, the other late 60s act who share credit as the two essential proto-punk forebears, I'd been a little frightened to delve into the Stooges.  While Lou Reed had his softer side -- for all the Velvets' rep for their more noisy and transgressive work, they also had songs like "Sunday Morning" and "Femme Fatale" and the gorgeous self-titled third album -- Iggy Pop was just flat-out scary, right?

But I took the plunge and...

It's a record I reach for now and then when I just want a sheer, mindless blast of rock and roll thunder free of pretension or pop.  "1969," "No Fun," "Real Cool Time," and of course "I Wanna Be Your Dog" take their 3-4 chords, drive them through Dave Davies' broken guitar amp from "You Really Got Me" about 10 times, and tack on Iggy's perfectly simplistic no-frills lyrics, and arrive at a blissed out pre-punk joyful fury.

To be fair, the album is a little slight.  Those four tracks are pretty much it; five if you count "Little Doll," which is also great but essentially a "1969" reprise.  I can do without the more metallic "Not Right," leaving just the quiet, spooky "Ann" and agonizing long dirge "We Will Fall," which sound better suited to their label-mates the Doors.  (Ok, they have their place, and provide some hints of what Iggy and Bowie would later come up with, but that's not the mood I'm after when I pull out my Stooges records.)  So for me, I take those five killer tracks, tack on the highlights of the follow-up album (most notably "T.V. Eye," perhaps my favorite Stooges track), and make myself a single, relentlessly-rocking Stooges album.

Here's my reconfigured blend of the first & second album highlights:
How about a video for "1969"?

...and "I Wanna Be Your Dog":
And who would have ever believed Iggy would still be taking a version of this band out on the road 45 years later?  I saw them play and it was fantastic.  Here's "No Fun," live 2013:
Here's that silly Seven Stooges song, by the way:
File Under: 1960s Hard Rock Iggy Pop Punk Stooges