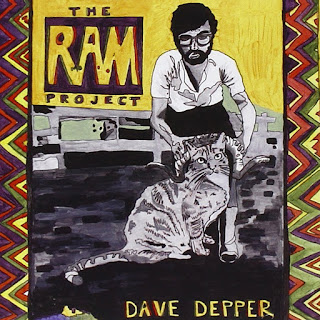 If I had to pick the one album that has had the biggest effect on my life, it would have to be Paul & Linda McCartney's minor 1971 masterpiece Ram.  It was the first rock album I heard (the only real "rock" album my parents owned when I was a young boy), and while I didn't have the tools at the time to understand or explain just why it sounded so unlike anything else I had heard up to that point, I just knew I loved it -- the beat, the melodies, the catchy choruses, the harmonies, the general sense of playfulness.

But I'm not here to talk about Ram (it will be in the book I'm working on, you can read more there).

A few years back, musician (and current Death Cab for Cutie guitarist) Dave Depper decided to re-record Ram, in his home studio, just for shits & giggles.  The recording is pretty much a note-for-note recreation; every instrument, every lick, right down to enlisting a friend to play the Linda McCartney role on backing vox.  Maybe a tweak here and there, and obviously a slight vocal variation between McCartney and Depper, but for the most part Depper did not update the album in any material way -- the only real difference is that it sounds production-wise like something someone recorded in 2011 in a home studio with modern technology, rather than Paul's more pastoral sonic palate.  This is not a punk tribute or a bluegrass tribute or anything evincing a new spin on an old classic, raising the question -- what's the point?  Why would someone listen to this when they could just listen to Paul & Linda's original?

For me, it raises some interesting metaphysical questions.  What would it sound like to hear an album you've been listening to for decades as if it were brand new and just being released for the first time?  Can you set aside your personal history with the album, whatever emotional baggage it may carry, and simply hear a great album brimming with power pop classics as if it had just come out,  just another indie rock album in a year that saw releases from the afore-referenced Death Cab and My Morning Jacket and Wilco and Real Estate and the Drive-By Truckers and the Vaccines?  In that respect, I listen to this more as a mental exercise.  "Hey, this is a great album, such great songs, it's almost McCartney-esque."

It's kind of like when I listen to Sgt. Pepper or Pet Sounds or Never Mind The Bollocks and try to imagine what it would be like to be transported back in time, hearing them for the first time when they were first released, trying to evaluate and enjoy them without the decades of history and criticism invading the experience.

Is this weird?  I guess.  But, anyway, it's an (of course) great album, and I do find myself pulling this out nearly as frequently as the original; it's not a necessary album, but I manage to enjoy it on its own merits as a pretty damn great 2011 power pop masterpiece.
I find I can make myself hear it as something separate and apart from the original work (credit to McCartney for penning songs which, while maybe dated in spots, still hold up incredibly well.)

Here's Depper and friends performing "Uncle Albert/Admiral Halsey" live:
And here's "Too Many People" live:
Just in case, here's the original for the sake of comparison:

And believe it or not, there's a third option -- a live recreation of Ram by indie rocker Tim Christsensen, in which he and a full band perform a live tribute to Ram (along with a bunch of other McCartney covers in the encore).  While largely another note-for-note tribute, there are a few variations from the original, plus a lot of live energy, making it quite different from the Depper take.  It's pretty great.