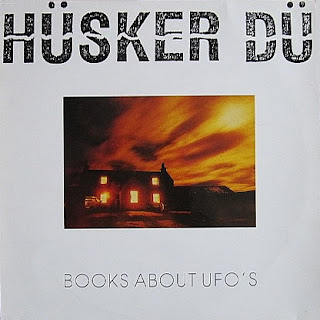 Any visitor to these parts knows that the Top 1000 list I'm gradually working through--hey, only 929 left to go!--is a stab at my personal favorites. I'm not laying claim to greatness here; this ain't Pitchfork or, god forbid, Rolling Stone. Sure, as was the case just yesterday, there are some obvious consensus picks here; having grown up on classic rock radio in the 70s, plenty of the usual suspects are among my personal faves as well.

But, no, Hüsker Dü's "Books About UFOs," from their superb 1985 LP New Day Rising, isn't likely to make one of those lists. It's kinda silly and, frankly, gonna scare off anyone who doesn't like a shit-ton of volume with their pop songs.

But it's given me ridiculous amounts of joy over the years. When I started up at the college radio station around '84-'85, I quickly gravitated to the jangly indie pop characterized by R.E.M. and the Feelies; the noisier post-punk and hardcore bands then in vogue were a tougher sell. People were pretty mad about Hüsker Dü's '84 double-LP landmark Zen Arcade, but I struggled to get past the blistering sonics.

"Books About UFOs" broke down that door for me. Like many of the contributions of late drummer Grant Hart, it was at its roots an infectious little sing-along pop song, buried amidst Bob Mould's buzzsaw guitar wail. But on this track, and a few others, the pure pop hooks managed to dominate (aided here by a barrelhouse piano throughout). The lyrics, about that girl much more attuned to distant worlds than the one right here at home, are affectionate and charming. "She's tellin' the same old story to everyone that she knows. She's just sitting in her room reading books about UFOs." Yes, you want to crank it up until the walls shake, as you must; but like the Ramones before them, the Huskers (particularly on Grant's tunes) knew the durability of punk rock still relied on a killer hook.