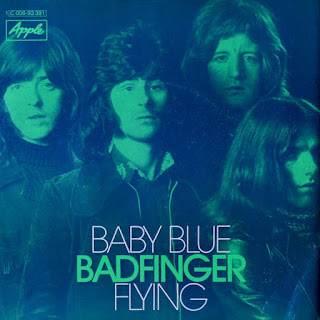 From Badfinger's fantastic 1971 LP Straight Up, "Baby Blue" stands alongside Big Star's "September Girls" and a few others as the defining songs of the power pop genre.

But for me, part of its appeal has always been a certain air of rarity. I first heard it as a kid on the radio, and immediately loved it. But back then, Badfinger's records were all out of print, and aside from splurging on an overpriced import, there was no way to actually own a copy. So for a number of years, all I had was the vaguest of memories of hearing the song on the radio and really loving it.

Finally, in 1993--maybe 15 or so years since I'd first heard it--Rykodisc reissued the band's catalog on CD, and I was able to have "Baby Blue" in my hot little hands. It had lost none of its magic, but the sheer joy of the song on its own merits--and, hey, from a killer pop hook to that crazy drum break in the middle, it's really the epitome of the perfectly-constructed tune--was all wrapped up in my perception of it as a great lost treasure I'd searched for for years and finally tracked down. Alas, in the age of instant online musical gratification, that thrill of the hunt is largely gone.

Endemic of the band's recurring issues, the songs was their final hit in the US, yet the UK market failed to even release it as a single. It finally made the UK charts decades later, when it was used to end the Breaking Bad series and became an overnight download sensation.The band lip-syncing on tv (video a bit out of tune):Lots of terrific covers out there. I particularly like the faithful rendition from Barbara Manning & SF Seals:But also Mary Lou Lord:...and Aimee Mann:...and Mac from Superchunk (with Portastatic):
File Under: 1970s Aimee Mann All My Favorite Songs Badfinger Barbara Manning Classic Rock Mary Lou Lord Power Pop Superchunk