All My Favorite Songs #37: Outdoor Miner 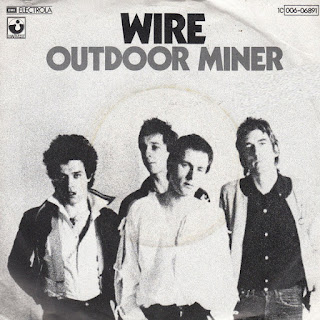 Original UK punks Wire covered an astounding amount of ground during their original 3-year run. (Which is to say nothing of their surprisingly effective second and third acts, running from 1987-1991 and 2008 to the present.) Their groundbreaking 1977 debut, Pink Flag, was a barrage of pithy art-punk tracks, loud and simple yet wickedly infectious; while 1979's 154 slowed things down while toying with industrial music and synthesizers without abandoning the catchy punk stylings entirely.

But for all their challenging genre explorations, Wire could also produce ridiculously tuneful pure pop songs. "Outdoor Miner" off 1978's Chairs Missing--which served as a colorful, widely varied bridge between Flag and 154--is certainly the most revered of their pop tunes. It retains the band's edge, most notably in the somewhat cryptic imagery of its lyrics and stripped-down musical brashness and jittery guitars, but the chorus is unadulterated melodic bliss, the band sneaking power-pop hooks and harmonies into the mix.

At under two minutes, it always leaves me wanting more (the alternate version with the piano break gives it a slightly wider berth at about twice the length, though query whether the quick hit is more effective). I still can't quite figure out what they're singing--it's one of those cases where the "real" lyrics you see online don't quite line up with (and seem less interesting than) the wrong lyrics I've been singing to myself for decades--but you can always just hum along.

And if you judge the quality and durability of a song by the number of covers, "Outdoor Miner" may be the greatest song this side of the Beatles, one of those tunes every band looking for indie cred feels obligated to try. Me, I can never argue with a rough and glorious Feelies cover:But why stop there? Here's a Spotify playlist of some 20 cover versions I threw together: