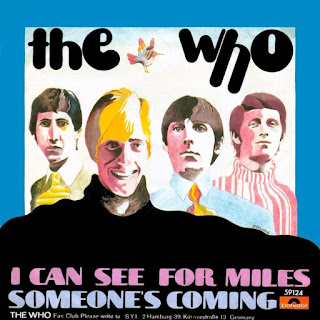 1967's brilliant The Who Sell Out is both a joyous celebration of lightweight pop music and a cheeky send-up of pop radio. Yet much like "Good Vibrations" on the Beach Boys' otherwise wigged-out (and foolishly aborted) Smile, Townshend serves up the perfect pop single in the midst of the madness. "I Can See For Miles" is really the pinnacle of Townshend's short-form popcraft before moving on to the expansion of the form on Tommy and ultimately sliding from pop to rock on Who's Next.

It's a masterclass in pop song construction, both reveling in and deconstructing the form. You've got your basic boy-catches-girl cheating motif ("I know you've deceived me, now here's a surprise") with the creepy stalker aspect that would resurface on everything from "I Am Superman" (the Clique, later popularized by R.E.M.) to "Every Breath You Take." It's tethered to a relentlessly catchy verse & chorus, tightly coiled restraint before explosive release. But it's elevated by a performance that captures the band's greatest strengths--Pete's novel use of guitar feedback, Moon & Entwistle bringing the rhythm section to the fore, Daltrey the ever-charismatic vocalist--but also strips out some of the distracting excesses. The intro is Moon at his most focused; Pete's solo is but a single note; Roger avoids the histrionics.

And oh that production! Just listen to that opening percussion, and you're locked in for the duration.

The studio magic was hard to capture on stage; it was never much of a live staple, though the latter-day Pete-and-Roger incarnation of the band gave it a shot.
File Under: 1960s All My Favorite Songs Classic Rock Who