All My Favorite Songs #34: Decades 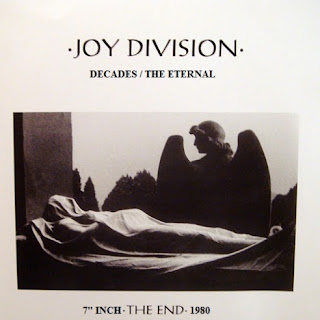 I realize the dark, goth vibes of Joy Division, and Ian Curtis' inimitable baritone, are not for everyone. Certainly, if I were trying to change someone's mind, I'd go with something a little more upbeat and almost-poppy, like "Love Will Tear Us Apart." But "Decades" is a monumentally striking song, particularly emotionally wrought even for a band whose body of work is frequently emotionally wrought.

Sonically, the tune demonstrates the remarkable amount of ground the band covered in their brief existence. Joy Division were among the handful of UK bands who happened to catch an early Sex Pistols gig and decided to start a punk band; yet barely a year removed from their original recordings, when they had dropped their original label for daring to add some synths to their guitar-driven rockers, they came up with this slow, haunting, keyboard-driven epic.

After an oddly syncopated percussion and bass intro, with a clanking drum sound and one of Peter Hook's most captivating basslines, the almost metallic-sounding keyboard kicks in; it's a bit grating, almost chilling, but it smooths out as they add the softer synths and a bit of high-hat to the mix.

Curtis' spooky croon is at its most lush here, intoning the surprisingly memorable opening lines: "Here are the young men, the weight on their shoulders. Here are the young men, but where have they been?" It gets darker from there, sorrow and dread, references to Hell and trauma, reinforced by that creepy musical undercurrent.

Of course, the song's darkness is intractably bound up in the band's fate. It's the closing song on the band's second and final LP, Closer, released two months after Curtis' suicide. It was also the penultimate song from the band's final concert, a May 1980 show captured on a recording issued as part of the double-album Still compilation (a hopelessly messy and out-of-tune performance, almost unlistenable, denying us a more compelling Curtis-helmed performance of the song).

I suppose this song stands out somewhat awkwardly on a list of mostly upbeat, poppier tracks, but it's always a riveting experience for me--preferably lights down low late at night--and an emotionally grueling journey I can't help but enjoy.

After Curtis' passing, the reconstituted New Order largely skipped the Joy Division catalog, but they've changed that in recent years, even performing "Decades" a couple times.Here's some random dude playing it on an acoustic guitar in his kitchen, 'cuz why not?
File Under: 1980s All My Favorite Songs Electronica Goth Joy Division New Order New Wave