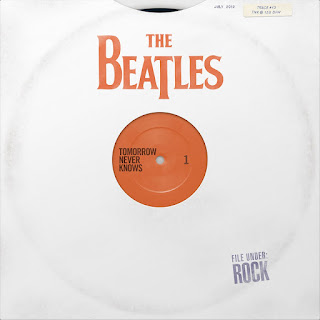 Look, you can't say I didn't warn you right off the bat that this list was gonna be top-loaded with Beatles songs. The good news is this is the last one for at least a month, and we'll actually be mixing things up a bit, with our first entries from the 1990s (and even the 2000s) in the days ahead.

As for "Tomorrow Never Knows," it's a monster. Who but the Beatles (well, ok, maybe the Velvet Underground) would have the cojones to record a song--in 1966!--comprised of a single chord and a whole lotta weird drones? They closed out Revolver with an absolute show-stopper of psychedelic weirdness and sonic innovation, Lennon at his most lyrically adventurous, with an inventive beat and Harrison's sitar loops and of course those jabbering monks.

While I can hear this song fresh every time I play it, I tend to put myself in the mindset of a 1966 music listener, accustomed to the likes of the day's pop music, and being walloped over the head with something so new and indescribable. It must've been incredible.

Heard as either a simulated acid trip or a more benign meditation session, it's an endlessly fascinating number. "Turn off your mind, relax and float downstream. It is not dying. Lay down all thoughts, surrender to the void. It is shining."

Hey, any Mad Men fans around?