All My Favorite Songs #39: A Shot In The Arm 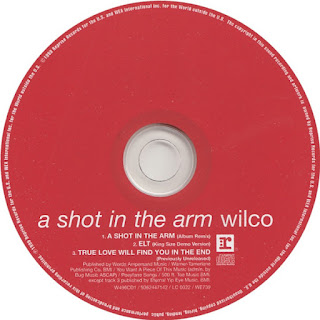 Finally, with this highlight from Wilco's phenomenal 1999 Summerteeth LP just edging its way into the Top 40, we get the first song of my Top 1000 from the 1990s--and, indeed, the first from the past quarter century (and just barely at that).

Which raises one of those questions music nerds can debate late into the night--how old does a song need to be to qualify as an all-time favorite (or, more broadly, as a timeless classic)? Should there be some sort of waiting period, a chance to see if the song truly stands the test of time, before eligibility attaches?

Unsurprisingly, most of the songs I've covered so far have been chestnuts from the 60s and 70s, the songs of my youth; with a few from the college radio 80s which shaped so much of my taste. But it's not like I sit around every day listening to the Beatles and the Velvet Underground and R.E.M.; you're just as likely to find me checking out something brand new, or replaying some record that came into my life well into adulthood. (And we'll increasingly be bumping into those tunes on this list.)

But as a general matter, I do suppose most songs need a fair number of spins before they should attain classic status. Each year I make myself a mix of my favorite songs from the past 12 months; but a few years later, many of those songs drop out of regular rotation for me. Sometimes the novelty wears off and the tune, while great, loses that special spark; sometimes the artist comes up with something new that surpasses the prior work and relegates it to second-best status.

And, of course, there's always going to be some personal bias for the music we discover in our formative years, the songs that have some sort of deeply personal connotations that make us value a work independent of its artistic merit; and a diminution in the number of new additions to that list over time is to be expected.

I've gone back and added a few more recent favorites to this list, and by the time I'm done bringing the tally up to 1000 there should be a decent sample of songs from the past decade or two. How many of those travel their way up to the double-digits remains to be seen.

Anyway, "A Shot In The Arm"--tremendous song. After breaking free of his Americana roots, Jeff Tweedy gets both artier and poppier on Summerteeth, with "Shot" being the record's pinnacle (and the clearest indicator of what was to come on the more experimental Yankee Hotel Foxtrot). There's that insinuating bassline with a whirl of pianos and synths and psychedelic studio tricks, anchored by deeply affecting lyrics about self-doubt and embracing change. The opening line--"The ashtray says you were up all night"--is penetrating, Costello-esque brilliance. But it's the repeated, closing tongue-twister--"What you once were isn't what you want to be any more"--that shakes me up on every listen.

As I wrote in Jittery White Guy Music, I was kinda lukewarm on Wilco until I heard them play this song live and was just blown away, one of those wondrous, revelatory concert moments. Here it is live:
File Under: 1990s All My Favorite Songs Wilco