All My Favorite Songs #33: Solsbury Hill 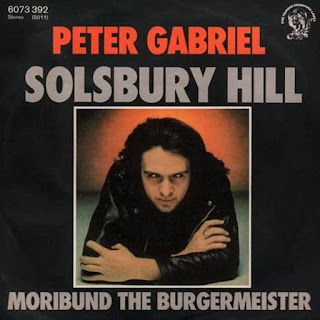 I first discovered Peter Gabriel around the time of his third solo LP, when "Games Without Frontiers" was all over the radio. (I didn't get into his earlier work as the frontman of Genesis until a little bit later.) I worked my way backwards, and really loved his first two albums. The 1977 debut was a bit more hit and miss, with a few songs that didn't work for me, but from the first spin "Solsbury Hill" caught my attention. A nifty little acoustic guitar riff, nothing too fancy, but something about its earnest simplicity really grabbed me.

It was only after getting into Genesis that I understood the context for the heavily metaphorical lyrics about his leaving the band--"I walked right out of the machinery"--but the sense of independence and self-discovery was obvious from the start. As the chorus line moves from "Grab your things, we've come to take you home" through the closing, triumphant, "You can keep my things, they've come to take me home," there's an overwhelming feeling of catharsis that just swamps me. Throw in the belated entry of the electric guitars and celebratory whooping at the end, and it's a pretty emotional little ditty.

These days, the song seems to be much more inescapable, showing up on the radio and movie soundtracks all the time (not to mention fake soundtracks, YouTube warriors grafting it into unlikely places). But at the time, Gabriel was a relatively new presence in our little suburban enclave, and my discovery of his first album and "Solsbury Hill" made them feel more like personal treasures, a magic that hasn't diminished over time.

Live in '78:And of course, that classic trailer for The Shining, recut as a romantic comedy:
File Under: 1970s All My Favorite Songs Classic Rock Genesis Peter Gabriel