All My Favorite Songs #30: Life On Mars 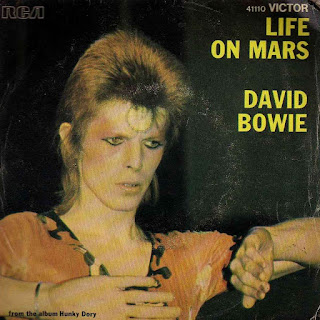 As noted last week, I'm torn between two tracks from 1971's Hunky Dory for my top Bowie pick; and while I ended up going with "Queen Bitch," it could've gone either way. "Life On Mars" is a very different song, of course. "Bitch" opts for a basic, Who-like crunchy guitar riff, pure Velvet Underground-derived simplicity, the guitar-driven glam that would characterize much of Ziggy Stardust and Aladdin Sane. In contrast, "Mars" is huge and operatic and almost proggy, Bowie's theatrical side taking over, the adventurous musical explorations that would infiltrate those albums and expand throughout the decade.

You've got Yes' Rick Wakeman sitting in on piano, a sweeping string section, and production that sounds more like a Bob Ezrin affair. Yet for all the heavy flourishes, it feels no less immediate, propelled by Bowie's majestic vocals and the entrancing lyrics, a girl at the movies, some old school cinema contrasted with something messier and much more impenetrable. The description of the film in the chorus sticks with you--"Take a look at the lawman beating up the wrong guy, oh man, wonder if he'll ever know, he's in the best selling show"--though how that relates to the recurring inquiry, "Is there life on Mars?" is something I've pondered for decades and never quite figured out. The odd societal observations he throws in are particularly indecipherable--"It's on America's tortured brow that Mickey Mouse has grown up a cow"--yet there's something modestly profound in their vagaries.

(By the way, it makes for a great paperback cover, courtesy of Todd Alcott, whose work is fantastic.) 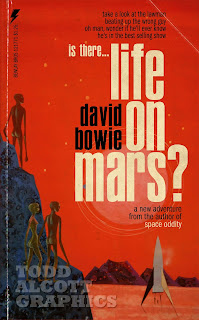 Between the lyrical mysteries and the grandiose musical sweep, every time I play this I feel like I'm picking up a new puzzle to decipher.Here's a stripped down, vocal-and-piano version performed live in '99. God, I miss this guy.
Also, has there ever been a stranger musical pairing than Barbra Streisand covering this song???
File Under: 1970s All My Favorite Songs Barbra Streisand Classic Rock David Bowie