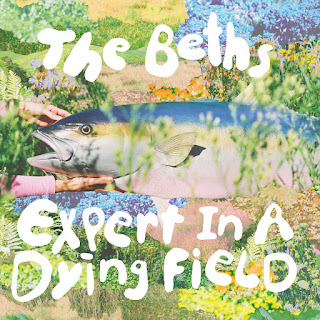 It's Friday, and that can only mean another great new release I've just gotta put out there even though I've only just made it through my very first spin.

New Zealand's finest export since the old Flying Nun days, the Beths just keep cranking out winners. I always get a little nervous when a pop band I like arrives at their third album. The first is all killer no filler; the second one does what's needed to avoid sophomore slump and show they're no fluke. But then there's the temptation to break from the formula--add some new wave synths; throw in some longer, more complex songs to show their chops; whatever. The Beths dodge that temptation, relying on the tried-and-true fizzy noise-pop at which they excel. Fortunately, they seem to have no shortage of deliriously catchy hooks to keep things fresh.

As usual, the main attraction is vocalist Elizabeth Stokes, whose guileless just-want-to-hang-out-with-her delivery, with those intermittent octave-leaping falsettos, can't help but lend a magnetic pull to her observant (if at times hard to make out through her accent) lyrics. But the whole band does their part, whether in the restrained yet punchy guitar solos, the acoustic/electric interplay, the intermittently deployed backing vocals, and just a general tightness that makes the music sound effortless.

No fast-forward-button tracks to be found. Start your weekend off right; buy it at Bandcamp.