All My Favorite Songs #31: Draft Morning 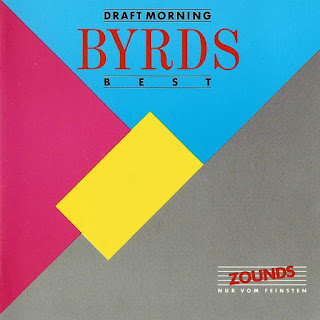 I'm guessing the first Byrds tune to make an appearance here is a bit of a left-fielder. And, yeah, you've got all those amazing Dylan covers, and band-defining originals like "Eight Miles High." But "Draft Morning," off my favorite Byrds record--1968's Notorious Byrd Brothers--has long captivated me. (And I guess I'm not the only one, as in searching for some graphics here I found a German greatest hits album that uses the song for its title.)

The song is among the band's most political, a Vietnam-era anti-war/anti-draft song (hence the draft reference in the song title); perhaps not surprisingly, it was written by the band's most politically outspoken member, David Crosby. Which comes with some baggage--they kicked Crosby out of the band before the record was completed, with Roger McGuinn and Chris Hillman apparently reworking the unfinished Crosby song and giving themselves co-songwriting credits (at least per Wikipedia).

It's unclear to me who exactly played and sang on each Notorious song, but the end result on "Draft Morning" is inarguably stunning regardless. Hypnotically mellow, arpeggiated guitars swathed in gentle reverb, absolutely gorgeous vocals, hushed harmonies swooping in and out--it stands as the Byrds at their most sonically psychedelic. The war theme--"Take my time this morning, no hurry. To learn to kill and take the will, from unknown faces"--is driven home by a flurry of gunfire and military trumpets in the song's center. One can debate whether breaking up an otherwise stunningly pretty song with this cacophony is unduly distracting, but it does give the short piece some added emotional heft.

Here's some interesting footage someone put together for the song (paired with "Wasn't Born To Follow," one of the two outstanding King/Goffin tracks on the record).