All My Favorite Songs #29: Sweet Jane 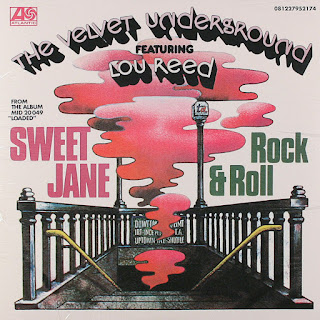 One night back in college, my short-lived band played on a triple-bill "Battle of the Bands" at a campus party. We tore through a bang-up "Sweet Jane," highlighted by a pretty cool, Hendrix-like introductory jam from our lead guitarist, who was pretty talented. (In contrast, I played a pretty terrible rhythm guitar, turned way down in the mix.) But the song lost a bit of its punch, since both of the other bands had already also covered "Sweet Jane" in their sets.

It's just that kind of song, I guess.

Some may point to 1970's Loaded, the fourth and final proper Velvet Underground LP, as something of an attempted sell-out, Lou Reed dropping the experimental facets of the band that had made its prior albums so groundbreaking and enduring, and shooting for a more radio-ready classic rock sound. And no doubt "Sweet Jane" (like the other enduring stand-out, "Rock & Roll") was a ready-made pop-rock confection that would've been a #1 hit but for the Velvets' reputation as a band that doesn't offer #1 hits. But that doesn't make it any less great. The riff is an all-timer, one that every guitarist loves to vamp on (or at least every guitarist present at that night's Battle of the Bands); it's a simple, 4-chord affair, gently strummed rather than ratcheted out of the strings like their earlier records, that seems pretty basic yet is wholly distinctive. Plus the strangely arpeggiated guitar intro is wicked cool.

And of course Lou Reed is still Lou Reed, even his straightest pop song managing just a bit of transgression. "Standin' on the corner, suitcase in my hand. Jack is in his corset, Jane is in her vest. And me, I'm in a rock 'n' roll band." Perfect little opening line.

The song had a bit of a convoluted history. The producers, without Reed's knowledge, lopped off the bridge (that mellow "heavenly wine and roses" bit), so I grew up on a vinyl copy of Loaded that jumped right to the "Sweet sweet Jane!" outro after the last verse, the longer, complete song relegated to the live version. It wasn't until the Loaded CD reissue came out in the '90s that the studio track was returned to its original form, and to this day it still feels a little disorienting (almost unwelcome) when the bridge starts up. Which says something about how many times I must have listened to that shortened, bastardized version in my youth.

Lou gives it the full-on hard rock/glam treatment in '74:Waaaay too many covers out there to note (the Cowboy Junkies' lethargic take may be best known, introducing much of the public to the "wine and roses" bridge before the Loaded reissue came out), but I've always loved Mott the Hoople's faithful yet compelling version (with plenty of cowbell):I'm also a big fan of last year's "Black Book," with guitarist Eden James repurposing the riff:
File Under: 1970s All My Favorite Songs Classic Rock Lou Reed Velvet Underground