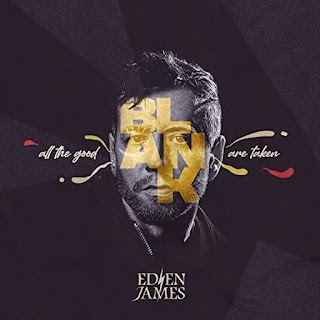 Damn, another great 2021 release! New York-based Australian rocker Eden James makes no qualms about his influences: This is a flat-out ode to Lou Reed & David Bowie circa 1972 ("Black Book" going so far as to nick the "Sweet Jane" riff), a loving trip through Stones-tinged glam that also calls to mind a bit of Mott the Hoople and, especially, Peter Perrett & The Only Ones. Despite the 70s glam touchstones, it's got a punchy, current sound, songs like "New York" slipping a lit bit more into Strokes territory.

But the "hey this sounds like" revivalism of the record (which at 8 songs is almost disappointingly brief) makes it no less great. Opener "Bad Girl" declares its pop-glam intentions with a riveting riff; the afore-referenced "Black Book" is a bit of a cheat given its familiar hook, but no less enjoyable for it; and "Something Called Love" is the best mid-70s Stones song of the 2020s. But there are also quieter, more brooding tracks as well: the gripping ballad "Dangerous Game" and the slow-burning closer "Negative Space" call to mind the dramatics of Born To Run-era Springsteen, while "The Villain" introduces a deep strain of Americana (or perhaps a nod to his countryman Nick Cave).

James has a few earlier albums which I'm just working my way into, similarly glam-indebted (particularly his 2008 debut Electric Charge), but Good Blank is a terrific entry point, an unexpected shout-out to a lot of old faves with a nonetheless fresh feel.