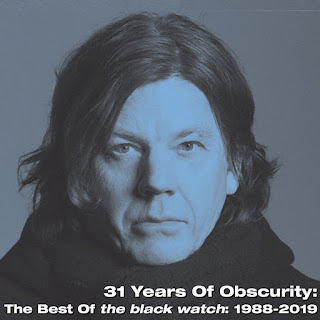 I usually avoid greatest hits compilations on this blog; I'm still an advocate of the LP as an art form and prefer to talk about music in its original presentation rather than as a mere collection of songs (even if an over-large record collection and limited time means I often condense artists down to home-made compilations for personal listening).

But I'm still trying to get my arms around the Black Watch, a long-running and incredibly prolific act I've only recently discovered, whose intimidating discography is hard to break into; and this collection from a couple years ago is pretty remarkable and serves as a perfect introduction to a ridiculously below-the-radar band.

Given how long the Black Watch has been releasing music, it's tough to put a finger on how to describe them (and their sound has evolved quite a bit over the years). For the most part, I initially heard them as a sort of quaint, eccentric British act, calling to mind everyone from the Jazz Butcher to Cleaners From Venus to the Smiths, not to mention strong strains of Australia's Go-Betweens and New Zealand's Chills. So color me surprised to learn that, despite this distinctly non-American sound, they hail from Southern California. Go figure!

The band is largely the work of brilliant singer-songwriter John Andrew Fredrick with a revolving cast of musicians (accentuating the Cleaners From Venus/Jazz Butcher analogy), lending to the stylistic diversity over the years, from the above touchstones to the jangly pop of Teenage Fanclub and even traces of buzzy shoegaze. And while the music is terrifically engaging and wide-ranging, Fredrick's lyrics are particularly attention-grabbing--hyper-literate, quirky, and clever (just listen to the wonderful "Pershing/Harvard Square" and you'll see what I mean).

I'll leave it at that; you really need to hear it to get a grip on it. I've started to pick up some of their (massive) back catalogue, using this as a guide. (They also released a companion compilation around the same time, The Vinyl Years, which collects some of their 1988-1993 material and sounds a lot like it emanates from the C86 UK indie scene.) You can preview & buy the album over at Bandcamp.

...and an audio rip of "I Don't Feel The Same," one of my favorites on the album:...and "Pershing/Harvard Square":