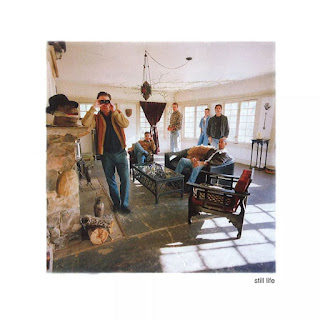 Been listening to a lot of the Connells lately. Well, that's not entirely true--as one of my favorite Southern jangle pop bands arosing in the college radio 80s, I've never NOT listened to a lot of Connells; they've always been one of my go-to bands. But after a 20 year break (at least as a recording unit), they've recently regrouped, playing a few Covid-era webcasts in preparation for their upcoming reunion album, Steadman's Wake, which you can pre-order over on Bandcamp. (The first two songs they've released to streaming media are terrific.) Plush, somewhat relatedly, I'm about to dig in and put together a Connells Top 10 for Toppermost (though I'm kinda dreading the task of narrowing them down to a mere 10 songs).

I've already talked about my two favorite Connells records, 1987's Boylan Heights and its follow-up, 1989's Fun & Games. The next logical place to go would be 1993's Ring, their most commercially successful record and arguably their strongest overall. But I thought I'd give a nod to 1998's Still Life, a fine record which doesn't often receive a fair shake. In some ways, it was a glorious return to form after 1996's Weird Food & Devastation, a disappointing misfire (IMHO) which cranked up the distortion pedals while losing most of the melodic hooks that have always been the band's primary strength. With Still Life, the noisy alt.rock that dominated Weird Food is gone, and the gentle melodicism is back.

There are plenty of chiming pop tunes here that fit alongside the band's earlier glories, songs like "The Leper," "Crown," and the title track the sort of mid-tempo pop tunes the band seems to conjure up without much effort. And there are some lovely ballads, notably "Bruised," which kicks off with a rousing riff before settling into a gorgeous, mellow groove, and the terrific "Gauntlet." Guitarist George Huntley, the George Harrison of the band who typically gets a few tracks per album, offers up the jaunty Americana-tinged "Curly's Train," lightweight twangy fun. (Alas, Huntley has not returned to the band in its new incarnation.) They rock out a bit on "Gonna Take A Lie," a radio-friendly rocker that's a bit too alt.rock for my taste but is still an improvement over the like-minded songs on the prior record.

Alas, this would be the last "proper" album from the band (2001's Old School Drop-Outs, released as the band was saying its goodbyes, is a bit of a mish-mash of finished songs and rough demos).

Here's an audio rip of "The Leper":